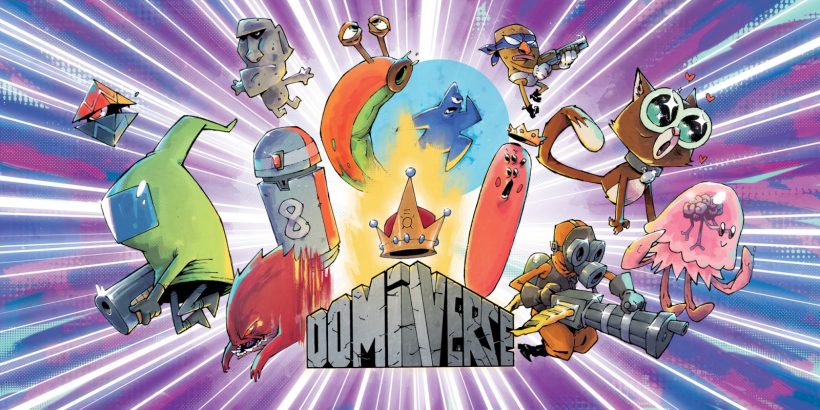 An arena fighting game focusing on frantic local multiplayer action, Domiverse from developer Haunted Tie pits 12 of the universe’s most eligible mercenaries against each other in a fight to the death for a crown that will grant them unrivalled power. It’s an exciting, unforgiving game when played with friends or at parties – but it’s not as exciting when played alone.

Right out of the gate, Domiverse‘s cartoony animation style and music is reminiscent of Newgrounds animation from back in the day, and it suits the erratic, menagerie of characters well. You can choose to play from 12 of these different weird and wonderful creatures – from alien slugs, to robots, to potatoes – each with their own unique traits and skills out on the battlefield. It’s a fun, nonsensical world that doesn’t take itself too seriously – perfect for a party game.

The in-game graphics are a pleasant, if samey 16-bit style, but they get the job done. The game does seem to lose some of the personality it establishes in its cinematics, character designs and accompanying comic books, however, which is a bit of a shame. The stages themselves, while certainly varied in their layouts, also are quite forgettable.

Gameplay-wise, Domiverse isn’t too far in its premise from Super Smash Bros, as the arcade mode follows the same level-by-level structure, and the challenge stages closely take inspiration from its target challenges. However, while the overall setup might feel familiar if you’ve played Smash before, the moment to moment gameplay is much more like TowerFall in a group; sporadic and unpredictable. Deemed “The ultimate one hit brawler” by the developer, Domiverse has quite the unforgiving singular health bar mechanic, putting everyone on edge from the get-go with an instant ‘sudden death’ feeling. The aim of course is to eliminate all others on the screen as quickly as possible, without getting hit yourself.

While this does add a level of intensity to the gameplay that positively fosters fiery competition among friends, sometimes it just feels cheap and luck-based. But, as any recovering blue shell victim will tell you, what’s a bit of multiplayer fun without luck? The trick, as with any game of this nature, is to study the different characters in order to anticipate their strikes and master the abilities that your chosen character has at their disposal.

While the single-player aspect of the game can be a little underwhelming and forgettable, there are a variety of different rule switch-ups and modes built-in to spice things up a bit, a ton of fully-fledged comic books to read through for exposition on the characters, and even a couple of unlockable fighters to give you something to work towards. The game gives you enough bells and whistles to stop it from getting repetitive when playing locally.

Overall, Domiverse is a simple arena arcade game that’s most effective with friends. Its single player is a little boring and the one-hit gameplay can feel unfair at times, but as a party game it’s the erratic fun that it sets out to be.

Domiverse doesn’t do enough to be a memorable or worthwhile experience solo, but with some friends in a party environment it makes for good, frantic fun, with its instadeath mechanic and colourful cast of characters to choose from.