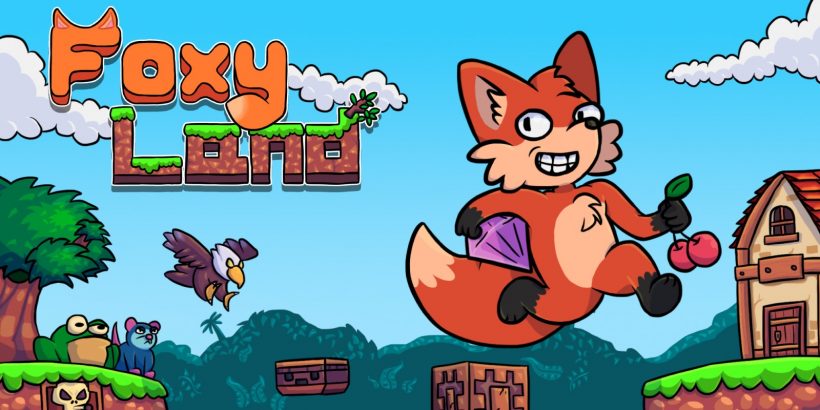 Boxing Day hasn’t historically been a great time for foxes.

Thankfully, the traditional hunts have been outlawed in the UK, but our sneaky friends still apparently have a tough time of things, particularly in the case of Foxy Fox, the protagonist of FoxyLand. Ratalaika Games’ pixel art platformer sees Foxy Fox’s girlfriend Jennie swept off her feet and carried away by a pain-in-the-bum bird. For fox sake.

For the course of thirty-six levels, you need to get Foxy Fox across the stage, collecting gems and cherries. There are a finite number of both, but they each serve different purposes. You’ll need to collect all of the gems in order to unlock the door to the house which serves as the end-point of each level – without all the gems, you won’t be able to finish. The cherries work differently – there are considerably more of these dotted around the levels, and you can go around collecting them all, but you only need to gather a set number in order to achieve a three-star top score at the end of each level.

Retaining those cherries is where things will be the most difficult for those playing FoxyLand. Taking a hit from any of the level’s enemies will result in a number of your cherries being scattered all around you, with a very punishing short period of time granted to you in order to scramble them all back before they disappear. Of course, in some of the more challenging stages, there’ll be a lot more high-risk jumps and runs for your platforming entertainment, but these will naturally come in tandem with a higher likelihood that you’ll run into trouble with an enemy and end up losing your hard-found cherries. The solution is to weigh up the level of risk in your head before deciding on whether to go after a difficult-to-reach cherry – knowing that you don’t have to get all of the cherries in a stage to get a three-star rating gives you a degree of leeway which allows for some strategic decision-making in what are otherwise simplistic levels.

It’s the lack of sizeable depth to the levels which is arguably the main detraction. Sure, thirty-six levels is a decent amount, but they’re all bite-size, and you’ll never find yourself stumped in levels with the best route from the start point to the end point usually being immediately apparent from the off. As a result, FoxyLand comes across as something of a by-the-numbers platformer which doesn’t really offer any new ideas of note.

Unwanted distractions from the platforming come in the form of some iffy controls, particularly in sections where Foxy needs to climb ladders. Pushing up on the D-Pad should result in the character ascending ladders, but for some reason that rarely works right here, as hitting the D-Pad upwards in front of a ladder can sometimes send Foxy left or right without explanation, and this will only correct itself by performing a jump. Some levels see hazards chasing Foxy throughout the stage, and not being able to seamlessly latch onto a ladder makes this annoyingly difficult.

But FoxyLand isn’t a bad game; it’s simply an unmemorable one. The pixel-art is lovely, sure – but the whole thing feels like it’s been done before, from the colour scheme to the premise, and the cutesy characters to the platforming mechanics. It’s an eShop title which won’t stand out from the catalogue in a few weeks’ time.

FoxyLand is a by-the-numbers platformer which won’t come close to setting the world alight. It’s alright for what it is, with its thirty-six levels lasting a few hours, but you won’t remember much of it in a month’s time.