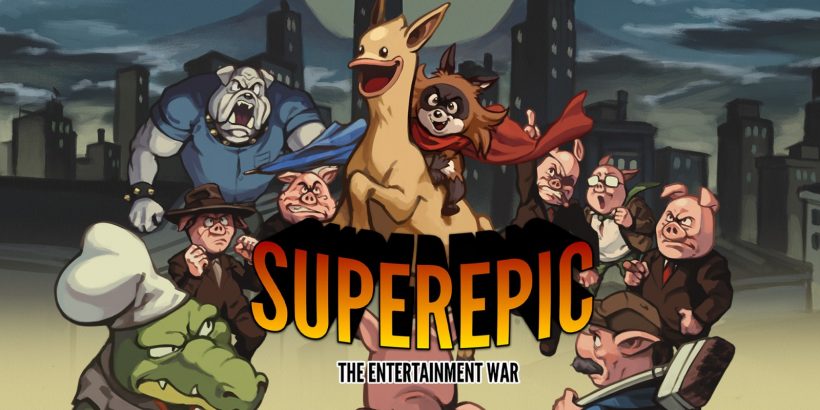 Sometimes a game comes out that feels a bit too real. You know the type: the ones with extremely close parallels to some happening in our own world, where you constantly have to consider how, even as a parody, the game matches up to real life in an eerie manner. Fitting into this category, SuperEpic: The Entertainment War is a Metroidvania in which a corporation is enslaving the people through free-to-play games. It is up to you to take down this company while exploring challenging halls and discovering deep, dark secrets.

Regnantcorp oversees everything in this society. They are the lone video game developer in this world, which has allowed them to implement their plan. Players get sucked into a loop of addiction and spending that makes them ignore everything and everyone around them. A brave raccoon and his llama steed have decided to fight back, and that is where your story begins. With the help of an underground resistance group, you will upgrade your arsenal and fight through hordes of executives to make your way to the top of the corporate ladder. Beyond this message and theme, though, there isn’t much of a deep dive into what is happening, as most of your time is spent in the actual gameplay loop. Truth be told, the interesting humanoid animal characters are the best part of the story portions, as they offer a unique charm to this sinister tale.

Nothing is too difficult in terms of SuperEpic‘s platforming, with the majority of “tough” jumps just being a way to bar you off from later areas until you pick up certain abilities. Instead, difficulty is created through the chaotic use of enemies who race towards you to fight. Some simply run at you, while others have various attacks based on the enemy type, but there is always a lot happening, which makes getting through stages a challenge. I personally always wish for platforming on par with the greats, but this title focuses on its combat, and the platforming takes a backseat as a result.

With regard to the combat, you have three attack types: a down smash, a side attack, and an uppercut. The eccentric collection of weapons at your disposal not only makes the game more fun, but also adds a level of strategy to developing a weapon load-out that makes the combat quite special. Ploughing through the enemy creatures is satisfying and allows you to rack up coins quite quickly.

Speaking of which, the currency system is very important in SuperEpic. You don’t get upgrades to your health or weapons through normal levelling conventions, as the game utilises a free-to-play-esque system that has you paying for your upgrades rather than earning them. This is obviously a commentary on free-to-play titles, but nonetheless that is the system in play here; collecting coins to buy that better weapon or increase your health is crucial to your progress. Time-conscious players can game this system a bit, however, as leaving and entering a room respawns all the previous enemies. I would prefer to properly earn levels through well-designed systems, but the commentary is undeniably playful.

All in all, SuperEpic is a challenging action title that fails to offer up the platforming most fans of the genre would hope for. Regardless of this shortcoming, I still found the humorous weapons, theme, and quirky cast of characters to be enough to propel past most of my grievances.

*Update: Numskull Games contacted Switch Player post-review to clarify they do not consider this title a “platformer” so instances where it was referred to as one have been changed.

SuperEpic: The Entertainment War is a respectable action-adventure game that offers satisfying combat and an interesting theme. Overall there is a lot to like here, even if things end up good, not great. The raccoon-llama combo helps for sure!