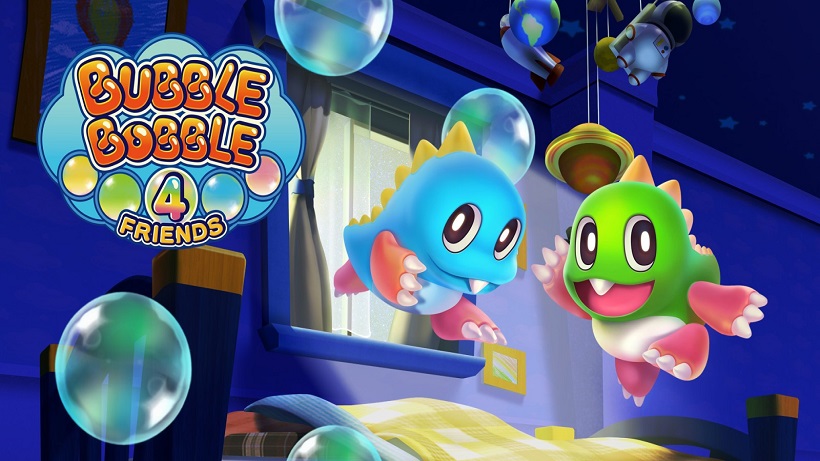 Bubble Bobble is back! Why though, I’m not too sure? There have been multiple iterations over the decades since the release of the original – including the spin-off Puzzle Bobble – but many have equated to glorified remakes. To be fair, 4 Friends does attempt to slightly modernise the series, but is it enough to warrant a numbered return to this classic series?

The plot of a Bubble Bobble game is typically bare bones, which is not unusual in similar classic games. 4 Friends is not much different here, although the setting moves to a child’s bedroom where your dragons must defeat a fairy that is turning different parts of the room into dangerous challenges.

To complete each stage, you and up to three other players must shoot bubbles at all of the enemies to disable them, followed by popping the bubbles with them inside in order to actually defeat them. Once all have been disposed of, you’re rewarded with a considerable amount of fruit to collect before you’re transported to the next stage. There is a special letter that might appear in a stage, and if you collect each one to form the word “EXTEND” it then enables you to upgrade your skills.

The previous description can almost be used to explain any other Bubble Bobble game, except the main difference this time is the way in which each stage is composed. Enemies are positioned across the whole stage which are often designed to carefully keep the player and enemies apart, requiring some basic strategy to not only reach them but to capture them in a bubble. The other significant addition is the different wind pathways that litter the stage. These do not impact your movement or that of the enemies, but it does dictate the direction of the bubbles that you fire, providing a new challenge to capture enemies in bubbles.

The combination of the wind and discernible level design do bring a significant change to the series; except despite this, it somehow doesn’t seem to be enough to truly update it for the better. It feels more like a distraction, something to slow the pace of the gameplay and a deliberate attempt to alter the game without actually doing so.

A similar critique can also be used regarding how the game looks. This is still Bubble Bobble with a 2D perspective used, although all the models this time are 3D. The dragons do look very good, but the standard enemies are forgettable. The boss designs though are a true disappointment. Each one shares a similar design, but with basic changes such as a different colour and a different piece of clothing on their head. The body designs look like a minimal amount of effort was expended on their design, before being reused throughout the rest of the game.

It’s not just the visual design of the bosses that is a let-down, the battles themselves are also a disappointment. There is little strategy involved — essentially, avoid an attack, then spam with bubbles until defeated. Except, given the floaty nature of the dragons, sometimes the fights become slightly more challenging for the wrong reasons.

The original Bubble Bobble is also included from the very beginning, and to be honest, you’ll likely have a much better time just playing that. It’s not that 4 Friends is terrible, it just seems like an attempt at a cash-grab a decade too late.

Bubble Bobble 4 Friends is more Bubble Bobble. One that was possibly intended for a new generation whilst also appealing to the old. Unfortunately though, it is unlikely to provide a memorable experience for either.