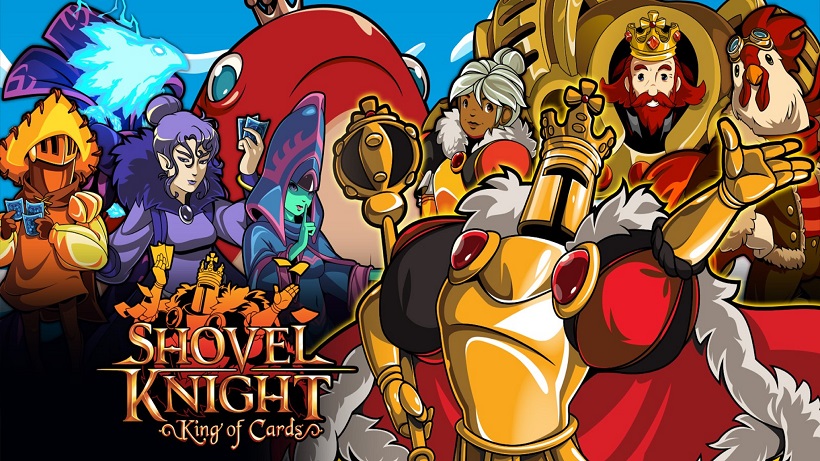 Shovel Knight: King of Cards is the final campaign in the Treasure Trove saga, and what a conclusion it is. In this 2D platforming adventure, you will take the role of King Knight himself – who is, surprisingly, not a King at all – on a quest to become the King of Cards. Upon learning of a grand tournament for the card game, Joustus, King Knight runs home to tell his mother he is leaving to defeat the three Joustus Judges that stand in his way and finally, become a King *of cards*.

The gameplay stays true to the Shovel Knight we know and love; 2D platforming in a beautifully pixelated world. King Knight must make his way through 4 new worlds that entail enemies to defeat and bosses to destroy. King Knight’s basic attack is a shoulder bash that plunges straight ahead no matter the height. If you hit an enemy or a wall whilst doing this you will jump into a twirling manoeuvre that will break blocks beneath your feet or hurt enemies. Whilst in this twirling manoeuvre you are able to then do another shoulder bash in mid-air. Learning to chain these attacks is vital for defeating bosses and proceeding through the levels.

You are able to purchase new abilities and upgrades as you progress too and these upgrades can drastically change the way you play. From health upgrades to new attacks and mobility options, these upgrades are completely optional but do make surviving a lot easier – this is no easy game.

From a spinning fire attack to a bubble that keeps you floating safely in the air, there is a range of interesting upgrades. King Knight’s personality also shines through in certain ability upgrades; there is an upgrade that makes him cry in order to restore five hearts at no cost and it’s usable once per life, which is extremely helpful and funny.

King of Cards’ 30+ levels are incorporated through the game’s world map. Similar to the likes of Super Mario World, players will select various levels from the world map. But, unlike Mario, in King of Cards completing levels unlocks various other levels that branch off in different directions. You are able to skip a lot of levels if you so choose, taking the quickest route through, but you won’t want to.

Learning the art of Joustus is one of Shovel Knight’s newest features. Joustus is a collectable card game that everyone plays in King of Cards and you can create a deck that suits you by collecting new cards from levels, defeating people or by simply purchasing them. The premise of the game is simple; use your cards to fill the board whilst collecting gems along the way. What’s not simple is the way in which you carry out this process.

Each card has a direction labelled on it: up, down, left and right. Those signs show which way the card will move when pushed by another card. Pushing cards over is the only way to get them onto the gems and win the game. What’s nice though is playing Joustus is, for the most part, optional. If you don’t like it, you don’t have to play it.

Overall, King of Cards was a joy to play through. Although King Knight isn’t as likeable as the esteemed Shovel Knight, he still provides witty comebacks and an interesting personality that you won’t soon forget.

Shovel Knight: King of Cards is a fitting conclusion to an almost perfect saga. Fans of the series will enjoy the new features, especially the implementation of the card game, Joustus, and newcomers will easily fall in love with this much-loved series.