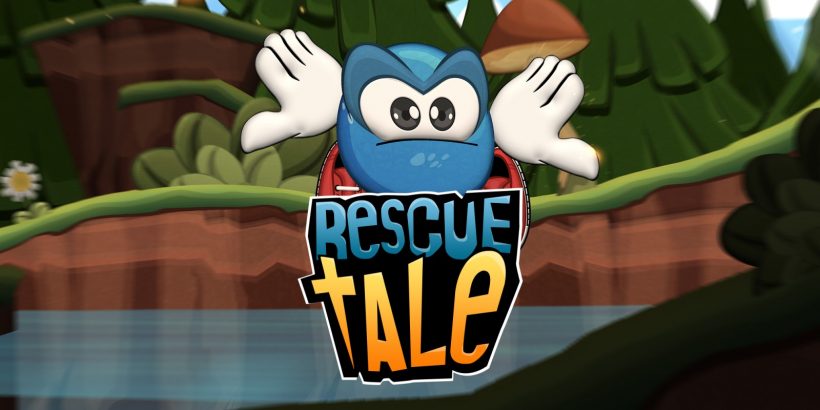 The Nintendo Switch is no stranger to platformers. Most who have been fans of Nintendo and its products for any sort of duration will be able to mention a good number of titles from the genre that are considered game-changing. As with any popular genre, however, there has to be some bad that comes along with all of the good.

Rescue Tale is an action-platformer from Bitecore that offers a serviceable experience for those looking for something to sink their teeth into, and yet unfortunately has core mechanics which regularly fall short, making it a tough pill to swallow.

You play as a blue blob named Bobby, who has to embark on an adventure after the children from his village are kidnapped by some evil force. Jumping, punching, and swinging your way through the Island of Evil Devil will be one of the most forgetful experiences you have as you enter this new decade of gaming. The story disappears after the initial opening, only stoked by gnome-like villager creatures who make you wonder how they ended up looking mostly humanoid, while your character seems more closely related to Pac-Man or Kirby in appearance. As you ponder this physiological conundrum, you’ll forget everything you’ve been told in the lacklustre story, especially after you realise the gameplay is quite rough.

As arguably the most crucial component in a top-notch platformer, jumping has to feel crisp and tight, while holding onto accuracy. Rescue Tale fails to do this in almost every way. Featuring a sprint mechanic to pair with jumping, much like the Mario series, you will find yourself regularly feeling heavier than expected, with jumps that are much harder to nail than they should be. All of this is pushed even further by the fact that button inputs feel quite sluggish, causing several timing issues across the board. When you have rotating platforms and spike pits you have to traverse, having input lag behind will frequently cause frustration.

Punching is your main form of besting the baddies in your path, but you also have the ability to equip different cosmetic-based weapons that don’t really change up the game, but offer a bit of customisation. Luckily, there isn’t anything wrong or broken with this mechanic, it just isn’t all that interesting either. Without a real reason to do anything but punch your way through the crowds, it feels like it’s unfinished.

Spelling and grammatical errors are a regular occurrence in the dialogue sections, which can be explained away by the fact this game was created by a Finnish indie studio, but it’s something that just adds another layer onto the lack of polish across the board. Even though it can add some extra humour here and there, it was definitely not intended.

One of the saving graces here is the cartoon-esque art style that is pleasant to look at, feeling a bit like a toned-down South Park or other form of 2D papercraft. However, even though it looks nicely put together, I also couldn’t help feeling like it has that mobile game aesthetic that some will find displeasing.

As a total package, Rescue Tale fails to set itself apart from the long list of titles in competition with it. With a jumping mechanic that just doesn’t feel satisfying, it’s worth looking elsewhere to get your platforming fix.

Rescue Tale is a subpar platformer that fails to make the most basic of mechanics feel good. A decent art style and some weapon options are far from enough to make up for the lack of polish in this one.