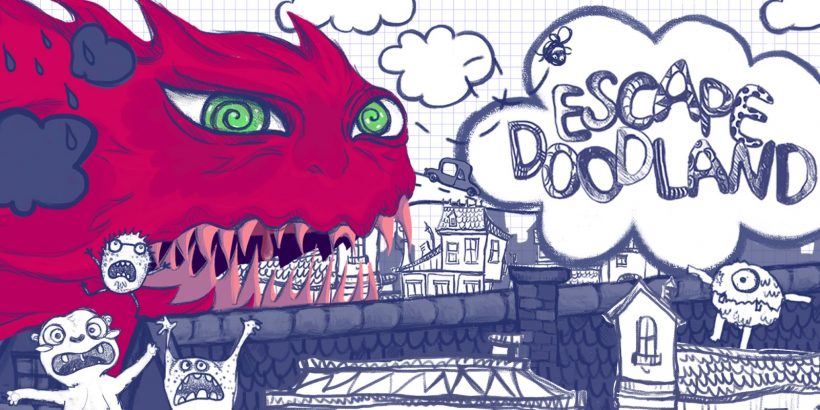 Games where ‘hard’ is the lowest difficulty setting have a curious but undeniable appeal. When a title punishes you for small mistakes and requires a serious amount of pixel-perfect precision, it can be hard to resist the urge to keep coming back, learning the patterns better, and dying many times over in the hope of eventually succeeding. Judging from its whimsical aesthetic, you mightn’t expect Escape Doodland to fall into this category, but this auto-runner by fluckyMachine offers quite the challenge.

The game opens with a brief tutorial that covers the basic controls, and it’s here that if you’re not a fan of toilet humour, your heart may sink a little. As you’re running to escape the enormous monster chasing you, you’re able to use your farts to stun your pursuer or even propel yourself onward by setting them alight. There are matching sound effects, but the volume of these can be tweaked in the settings if it’s not your cup of tea.

As far as auto-runners go, Escape Doodland is fast-paced and fairly unforgiving. Each level has two difficulty settings, ‘hard’ and ‘harder’, with the latter locked until you have completed the level at least once. The aim is fairly straightforward, simply requiring you to get to the end of the level in one piece, although there are also collectables which you must stockpile in order to progress through the game. Of course, there are numerous obstacles you will face, which certainly make surviving this world a challenge. Whether these be fast-moving enemies or environmental hazards that will temporarily slow you down, there’s plenty to focus on, and in certain stretches the elements all combine to make for a rather satisfying experience.

This enjoyability is, however, inconsistent. While some of Escape Doodland’s levels may offer a satisfying challenge, others feel frustrating due to the way traps often spring out at you unexpectedly. With such fast-paced gameplay, this means that you will often die the first (of many) times you encounter a particular enemy or mechanic. Successful completion of these levels comes down to pattern memorisation after plenty of deaths, which can be frustrating if it’s not your preferred gameplay style.

This lack of player-friendliness extends into other elements of the game as well. The in-game shop where you can purchase and activate upgrades for your abilities isn’t that intuitive to navigate, for example. Similarly, there is a good number of levels where new mechanics or restrictions are introduced with little in the way of an accompanying explanation. When this happens toward the end of the level and the lack of clarity leads to your death, it can feel unfair.

Visually, however, the game is incredibly interesting, with the entire world crafted out of scrapbook doodles. Each level has its own unique charm, and everything is accompanied by an unusual and mostly catchy soundtrack that will get stuck in your head. Unfortunately, though, the visuals sometimes get in the way of the gameplay; foregrounds are occasionally indistinguishable from backgrounds, for example, making it difficult to identify hazards and platforms even on the full brightness setting.

Escape Doodland is something of a mixed bag of a game. In stretches, the gameplay is interesting, enjoyable, and the right level of demanding to offer a very satisfying experience. In others, it’s patchy and frustrating. With this in mind, if you’re looking for a light and leisurely platformer, don’t be fooled by the aesthetic.

Escape Doodland may offer a light and upbeat aesthetic, but the gameplay is more challenging than you’d expect from these visuals. When it works, it’s good and rather moreish, but the experience is inconsistent.