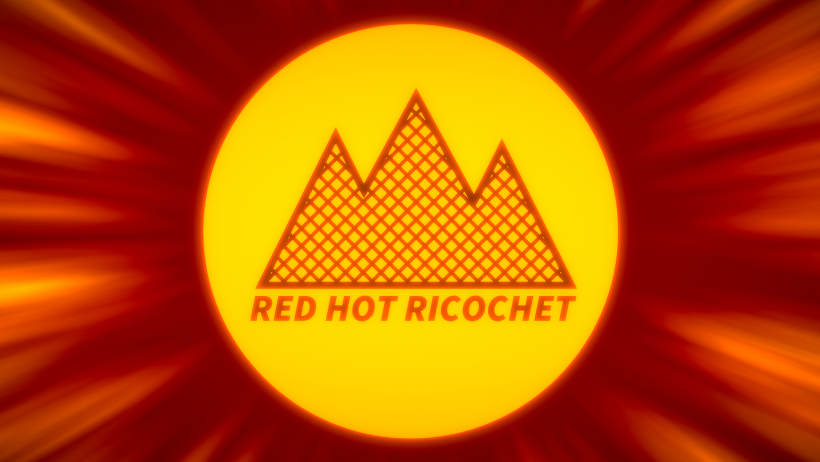 Red Hot Ricochet is a simple top-down, multiplayer-only game where players are pitted against each other in a fairly bland game of cat and mouse. The premise is simple: shoot your opponent(s) before they shoot you. The first player to reach 6 kills takes home the trophy, so to speak (there is no trophy.)

Of course, it’s a little more difficult than that. You essentially play as a tiny circle and dotted around the battlefield are many rocks that block a direct hit. That’s where the ‘Red Hot Ricochet‘ comes into play – you can shoot your bullets (of which you have 4) to bounce off these rocks in an attempt to catch out your enemy. Be careful though, as you can also kill yourself by doing this. Upon using all 4 of your bullets, you will essentially reload, leaving you defenceless for a short amount of time. Use your bullets wisely.

Throughout your ‘duels’, a few power-ups will spawn across the board; one will give you a shield, one will give you double ammo and one will give your bullets a longer ricochet. You have to shoot these in order to use their effect so you will need to judge whether that particular power-up is worth losing a bullet on.

Depending on the mode you are playing – of which there are two, Duel and Team Duel, you will be able to shoot your ‘dead’ team member to revive them (backwards, I know). This can be vital to winning a game.

The controls are simple. Move the right stick to move around and use the left stick to aim where you will shoot (displayed through a line on the screen); press the A button to shoot and the Y button to use an emote (which is completely for fun; it does not affect the game). Bear in mind that the controller layout will be different depending on the controller you are using but in my experience, the best and easiest way to play was with one player using the Nintendo Switch Pro Controller and the other player using the Joy-Cons. Using the individual Joy-Cons didn’t quite cut it as you miss that right stick for easier aiming.

As stated earlier, Red Hot Ricochet is a multiplayer-only game – there is no single-player mode at all, which was disappointing as it limits when you can play the game. It would have been nice to have the ability to at least play against bots but sadly, this is not an option. I would have liked to have seen some online multiplayer too but again, this is not available – making this only a party game.

Red Hot Ricochet uses a fairly minimalistic approach to its art style and it works so well. There is something very appealing about it and, although there isn’t much going on on the screen, the colours are vibrant and the aesthetic of the rocks has a comic-like style. The audio complements the game very well also, bringing the tone down in a somewhat chaotic environment.

Sadly, all of the positives you see in Red Hot Ricochet are short-lived as you can experience everything the game has to offer in a matter of minutes. I feel like an extra game mode or two to switch things up would have been beneficial as both Duel and Team Duel ultimately offer the same experience.

As fun as Red Hot Ricochet is to play when you’re with friends, it lacks that single-player component in order to really keep you entertained. Interest will quickly wane, leaving both you and your party looking elsewhere for further enjoyment.