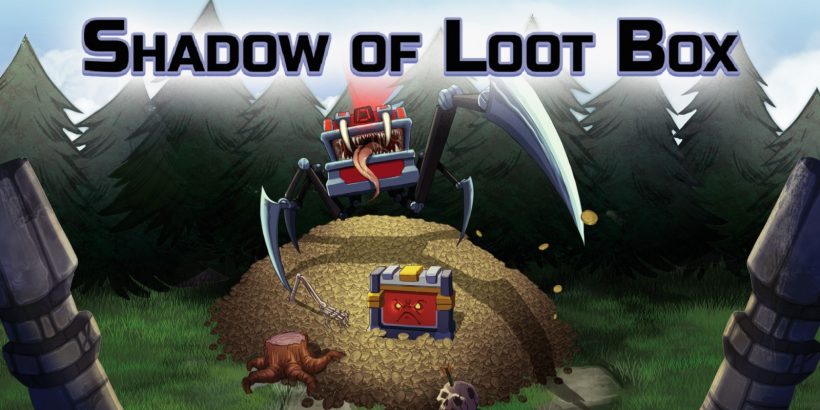 Comedy in games can be notoriously tricky to pull off, and it becomes more so when the brand of humour being expressed is so intricately tied to current events. Shadow of Loot Box is a prime example of this, being a voxel-based first-person shooter that so adamantly commits to taking the mick out of incidents like the Shadow of War loot box scandal, Battlefront II’s poor handling of microtransactions and more. Such cutting satire would have worked beautifully back in 2017, but fast forward and the furore is now all but forgotten about.

Admittedly, Shadow of Loot Box does show signs of brilliance in the early hours. You start out the adventure with only the ability to walk forwards, exploring a very Minecraft-esque dungeon in the search for literal XP. It soon becomes clear that this is a game adamant on holding a mirror up to the ugly side of gaming’s face, requiring you to purchase even the most fundamental of skills, including the ability to run, jump and even interact with objects. From there you’ll build your nameless character up until what you have is a somewhat familiar-feeling indie shooter, but sadly it’s here where any witty charm it briefly had quickly loses its lustre.

Each of the 16 distinct(ish) levels present attempts to poke fun at the shady economic practices of certain Triple-A game publishers. It’s just a shame that most of these overt digs simply haven’t aged well. One of the main NPCs you keep coming across, for instance, is a clear rip-off of Fallout 4’s Preston Garvey, a meme that hasn’t really been relevant in at least four years. I get it, game development is a long process, and I admire developer Stately Snail’s attempt to “stick it to the big guy” as just a small studio. However, that doesn’t detract from how untimely Shadow of Loot Box’s humour feels on Nintendo Switch.

In terms of the gameplay itself, aside from shooting legions of sentient loot box monsters barrelling towards you, a lot of your time is spent actually working out each level’s specific tasks – tasks you need to complete to gain a key to the next level. One stage early on, for example, requires you to collect a said number of crystals littered throughout the environment, while another sees you complete a fetch quest that concludes in a dragon battle. Every stage presents its own riffs on established video game tropes, yes, but it would have been funnier if they all weren’t so similar.

All this you do while upgrading your character, unlocking loot boxes that contain useful items or XP, and gunning down hordes of gaming’s worst enemy: personified microtransactions. However, even firing your weapons in Shadow of Loot Box feels underwhelming. Enemy encounters so often culminate in you vigorously backing away from extremely fast foes, all while you frantically pull the trigger for fear that if they catch up and do enough damage, you’ll be forced to restart the level. This overly determined AI, combined with some invariably stiff shooting, makes the actual act of playing Shadow of Loot Box unnecessarily frustrating.

There’s plenty of smart and biting satiric ideas present in Shadow of Loot Box, but it’s hard to ignore just how outdated many of them now feel, only a year or so after its initial release. Its witty shortcomings could have been largely forgiven if the gameplay mechanics surrounding it were any fun, but alas, there are too many flaws here to ignore.

Shadow of Loot Box begins promisingly, presenting itself as a clever knife that’s willing to cut through the bullshit of the Triple-A publisher economy. Unfortunately, it quickly descends into a repetitive and unfunny indie shooter.