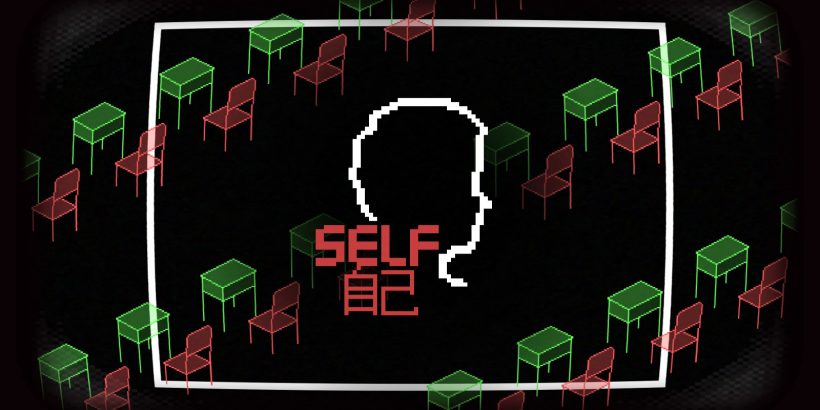 As games are now played commonly in a crisp 1080p at 60fps, there isn’t that need for players to use their imaginations as much. It wasn’t always like this, as graphical limitations meant that text-based adventures were often the most viable option for early game developers, and whilst gaming has evolved beyond the ZX Spectrum, there is still a place for this genre. Games use this style to convey messages to players that you cannot replicate on the screen. SELF is one of these games.

SELF is a text-based, narrative-focused adventure with a branching storyline and multiple endings. It follows a young boy searching for his father in a fractured and confusing world, which is about as much as I can say without spoiling key plot details. Your only source of knowledge comes through simple, pixelated graphics and text boxes, adding to the disorder and turmoil of the world that has characters ignoring your questions, and places disappearing at random.

The main appeal of SELF comes from this unsettling way of revealing the storyline. Your playthrough differs based on whether you ‘Face’ or ‘Avoid’ the truth at pivotal moments in the game, unfolding with different endings that will give you an insight into the dark, twisted, reality SELF takes place in. The game emphasises that players will need to reach every ending to experience its story fully, and makes this easier by allowing you to choose from which branching decision to start from. As you don’t have to replay the starting sections of the games, completionists won’t find this too repetitive.

The best games will always leave you thinking on your own actions, and SELF does this well. It will have you questioning whether you have faced up to your repressed memories, or if you too are not living in reality. This may not be the easiest choice, as demonstrated by the ‘Happiest Ending’ – staying in bed and doing nothing.

SELF does, however, fall into the trap of giving players the illusion of choice. In many cases, both choices will lead to the same outcome, just explained in different ways. I would have liked to see it incorporate a system using all decisions, including the smaller ones, to unlock further endings depending on how the player acted throughout their specific playthrough.

DoBell recommends wearing headphones whilst playing SELF, and for good reason. Its ominous aesthetic is complemented by a subdued soundtrack, and well-timed sound effects such as balloons popping, creating an immersive experience rarely found in the absence of high-quality graphics.

Unfortunately for SELF, its gameplay fails to complement the impressive storyline, as most tasks feel like a way to interrupt the story rather than thought-out game design. Taking inspiration from Toby Fox’s bullet-dodging gameplay in Undertale, when players are making the choice to either ‘Face’ or ‘Avoid’ situations, they can either dodge red projectiles to suppress certain memories or hit green projectiles to face the truth. Nothing about this has any challenging elements, as the objects move across the screen too slowly to make it difficult.

Overall, I would recommend SELF to anyone who values story primarily, as the gameplay outside of decision-making is too simple, making it dull.  The classic art-style is a homage to the roots of text-based adventures, and combined with a complex and compelling story, there’s a good chance you will be wanting to compete SELF in one sitting.

SELF perfectly utilises the text-based RPG format to create a thrilling narrative in a confusing world, matched by a sinister aesthetic. I would recommend to players that value story over gameplay, however, as the bullet-dodging mini-games don’t offer any real challenge.