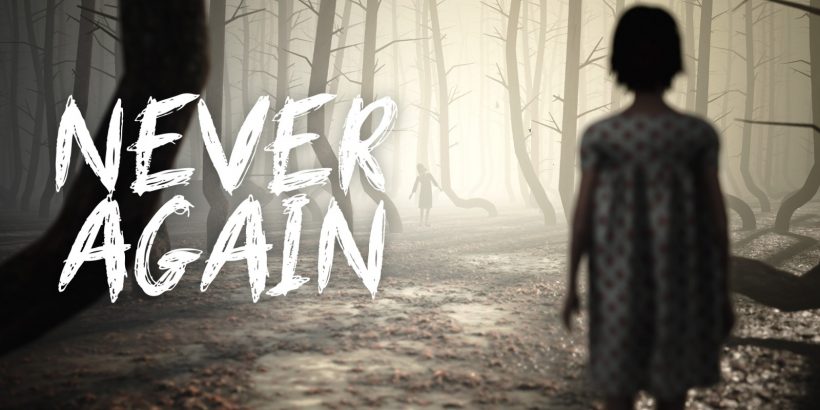 For many games, what you see is what you get. If you’re looking for an experience that will surprise you, though, look no further than Never Again, the horror puzzle title from Primary Games. The ostensible aim of this title is to find your missing brother and parents, but lurking under the nightmarish surface is a tale that will stay with you long after it’s finished.

‘Nightmarish’ isn’t being used lightly here; the developers have created a creepy, intense, make-it-stop atmosphere that persists from the beginning to the very final moments of the game. The sound direction is great, with unsettling music and a brilliant use of sound effects that will have your skin crawling. Similarly, the grungy, dim environments feel cold and claustrophobic; you can’t ever shake the feeling that something is very wrong. This atmosphere is achieved with minimal gore, relying instead on disquieting details to keep your anxieties heightened, and although the graphics are not the most outstanding we’ve seen, they’re used effectively to create a disturbing world.

While the atmosphere in Never Again is impressive, navigating this world is unfortunately something of a chore. It is incredibly easy to get stuck on object boundaries as you move around; there’s little fluidity in your movements, which is particularly frustrating in pursuit sequences when you need to be both sneaky and fast. Similarly, the title’s puzzle gameplay is less impressive than one might hope, with unclear environmental cues and poorly explained mechanics being the biggest drawbacks, not to mention that certain mechanics are only hinted at via audio cues, which raises questions of accessibility. One level in particular has intriguing level design but is vexingly tedious to complete due to the amount of backtracking, trial-and-error, and aimless wandering required before you can even understand how to solve the puzzle. Things are made all the more slow and frustrating due to the fact that you’re being pursued in said level and cannot wander freely; when you’re simply trying to find some direction, getting caught over and over just stops being fun.

I cannot say that this was not an intentional design decision on the part of the developers, however. The repetitious gameplay, frustration, and seeming impossibility of liberation not only contributes to Never Again’s atmosphere of panic and claustrophobia, but also doubles down on the game’s themes. I can acknowledge that it’s effective from a worldbuilding perspective, but unfortunately it does come at the cost of a player-friendly experience.

And this is all such a shame, because once you get past the frustration, Never Again’s story is one that will haunt you – as it well should. Small details that may at first seem insignificant acquire context toward the end of the experience, providing a level of unexpected depth to what is ostensibly ‘just’ a horror-puzzle game. That said, be warned that the narrative deals with very challenging themes; the game is certainly much darker than what you may expect from its premise of nightmares and asthma, and there’s little to no warning about the actual, real-world topics that this title addresses.

It’s hard to wholeheartedly recommend Never Again, as unfortunately the player experience is frustrating enough to detract from what the game does well. If you’re a die-hard horror fan or in need of a haunting and incredibly sad narrative, you may find value here, but be warned that the gameplay is patchy at best.

Thanks to its unsettling atmosphere and sorrowful narrative, Never Again offers players a haunting experience. Its inconsistent gameplay and unintuitive puzzle design will lead to plenty of frustration, though, so keep this in mind if you’re on the fence.