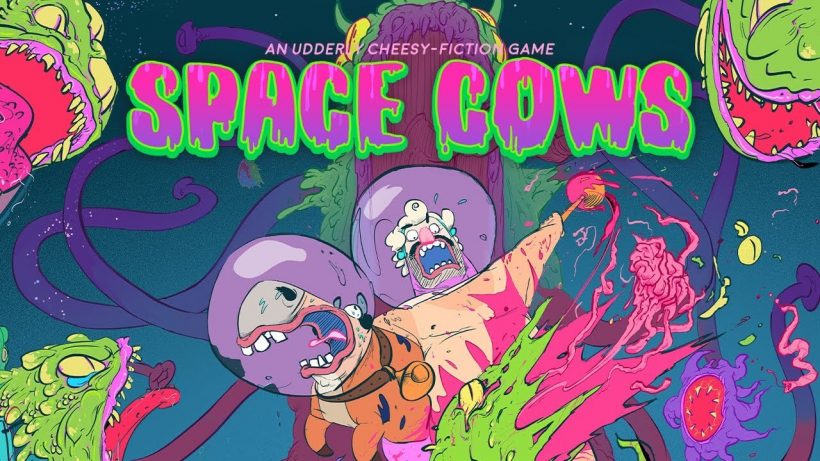 The Switch isn’t left wanting when it comes to solid twin-stick shooters, forcing any ambitious new indie craving a slice of the pie to work harder in order to gain people’s attention. Some entries might focus on offering tight firing mechanics; others may try and woo you with an attractive art style. And then, on the far other side of the spectrum you have something like Space Cows: a not so serious genre spin, coated in campy aesthetics and zany humour. Both are incredibly charming initially, but only mask the unfair challenge and floaty gameplay for so long.

Starting off with the positive, it’s nice to see a game of this sort take heavy cues from a futuristic style not too often seen anymore. Space Cows doesn’t task players with blasting their way through endless hordes of enemies within a ravaged dystopia, instead dropping you into a world of glitzy purples and bright yellows that’s more indicative of early 60s sci-fi serials. Is it all imitated in the name of parody? Sure. However, Space Cows ends up being quite a looker because of it, with steering your udder-equipped attacker through several linear levels always grabbing the eye.

Space Cows offers up three difficulty settings to jump into at the start, which gives the game another chance to poke fun at those looking for an easy ride. Those who do this won’t be playing as one of the eponymous space cows, but rather a giant block of cheese, you know, just because. From here it falls into standard twin-stick shooter territory, tasking you with guiding your character through many obstacle-laden rooms, while firing toilet plungers at the hordes of plant-like aliens called “moo-tants”.

Helping you do this are a handful of unique powers, such as being able to dash through lasers with just a tap of the L bumper (also useful for dodging around enemies), and the ability to slow down time. I came to rely on the latter quite a lot during my time with the game, largely because enemies surround you in such high numbers that most of the time it seems impossible to get through an area unscathed without it. All this you do while rescuing cows in need of your help, gathering milk to keep your lives replenished and battling endlessly with the floaty controls.

I get it, the entire game takes place in Zero-G, but one can’t help but feel that this is somehow just a cheeky narrative workaround to have Space Cows not handle well. Beloved twin-stick shooters are renowned for letting players manoeuvre and fire with precision, but those used to such genre staples won’t find it here. Instead, guiding your character around on the 2D plane is best likened to ice skating. And much like the zany art style and humour, it can grate after a while. It’s hard to see Space Cows appealing to anyone other than the casual crowd as a result.

Overall, Space Cows isn’t a bad game when it comes to the many twin-stick shooters available on Switch. It’s just one that sacrifices accuracy for an irreverent brand of humour that only goes so far after the first hour or two. Couple this with unforgiving checkpoints amidst lengthy levels, and the relentless nature of enemies – even on the normal difficulty setting – and you have a mildly inventive 2D shooter that’s fun and harmless, sometimes even funny at times, yet with limited appeal.

Space Cows is a strange twin-stick shooter, sacrificing precision and control for well-intended humour that doesn’t always work. Its decision to approach the genre differently is endearing, but it’s lesser than its eShop peers as a result.