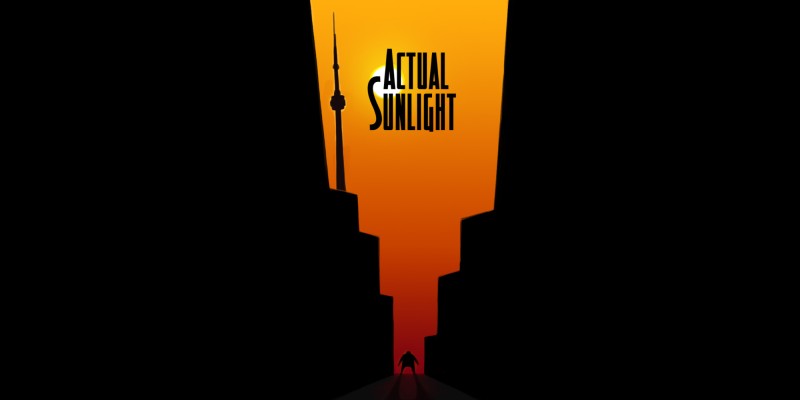 I think everyone has had issues with mental health issues at some stage in their lives, but everyone experiences them in different forms. There’s no real answer on how to deal with having depressing thoughts and no right way to stop them. That’s what made Actual Sunlight hit home for me.

Actual Sunlight is primarily a narrative game about anxiety, depression, and suicide. Things that no one really wants to speak about. You play as Evan Winters, an extremely lonely and depressed, 30-something-year-old just trying to scrape his way through life. He’s at his lowest point and from the moment you press start you realise that Evan is constantly battling demons – demons that are telling him to end his life on a day to day basis.

Actual Sunlight plays out more like a visual novel than any other genre I could compare it to and because of this it almost felt as though I was watching Evan’s life unfold – and not in a good way. He wakes up, takes a shower, goes to work and goes home to bed – rinse and repeat. For a while, this was my life and that’s scary.

The narrative is displayed in the simplest of ways, with white text on a black background. Very basic, but I guess that’s the point. Each of these segments is meant to document pinnacle events in Evans’s life or thoughts running through his mind. These bursts of text can be extremely difficult to read – for me, I saw myself in parts of them and that’s why Actual Sunlight stands out.

The little bits of actual gameplay you experience are displayed in a 16-bit, retro style. Again, extremely basic, but I didn’t really care, as at this point I was hooked on the entire story and the narrative as a whole. These little points of gameplay were quite refreshing. My only annoyance with them is they only take up a small portion of the screen, forcing you to squint your eyes when playing this one in handheld mode.

The sound in the game is pretty nonexistent. I feel like some emotional background music would really help to set the scene, but there isn’t really any at all. This is probably the intention to keep the players focus on the words themselves and nothing else, which works. There are very brief moments of music or sounds but it’s so quiet you don’t really notice it’s there.

WZO Games describe Actual Sunlight as a ‘short, interactive story’ but I didn’t realise just how short it would actually end up being. I clocked in around an hour and a half which is ridiculously short. This may deter some from playing it, but you really shouldn’t let it stop you from giving it a try. It has such a powerful story to tell and it’s somewhat educational in terms of mental health. The fact that someone may play this game and realise something in themselves that they need help with is simply incredible. Let’s get more people talking about mental health!

Actual Sunlight has a powerful and emotional story to tell. It deals with issues people don’t really discuss, but with what amounts to roughly a 2-hour story, I was left feeling it was over before it had really begun.