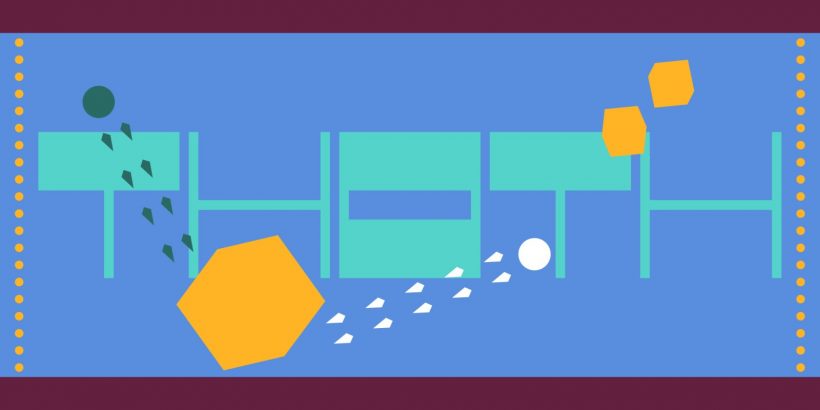 Coming as a pair with the similar-yet-different 140, a puzzle platformer from the same sole developer; THOTH is a simplistic, level-based arcade shooter that breaks down the genre’s formula to its bare bones, building a set of 64 levels that will have you frustrated – yet hooked – until the finish. The two games make quite the pair, and THOTH presents a fun challenge for those wanting to test their might in an unforgiving, twin-stick shooter.

Developed by Jeppe Carlsen, former lead gameplay designer at Playdead (creators of the massively-acclaimed INSIDE and LIMBO), THOTH is a game inspired in part by titles such as Geometry Wars and Robotron: 2084. Combining the trickiness of The World’s Hardest Game with the ubiquity of  the arcade classic Asteroids, THOTH is a game that is frustratingly addictive; a trial and error bullet-hell endurance test that you’ll struggle to put down – even if you probably want to at times. And despite the many comparisons and inspirations it might evoke, the game feels unique, with its own style.

While the controls, gameplay premise and overall presentation are incredibly simplistic, don’t let that fool you, as you’ll actually have to employ quite a bit of strategy to get through the levels THOTH throws your way. The crux is straight-forward: Dodge and shoot to destroy all the targets. Not just one level at a time, but through 64 successive levels. You’ll get checkpoints, of course, fleeting the deeper you manage to make it. If you fail a level twice in a row you’ll be punished, however, and have to go back to your last save spot, regardless of how far back that may be.

Shoot and move are the only strategies at your disposal here, and when you’re not firing, you can move faster to evade incoming projectiles. It’s classic stuff, but when you find yourself at constant risk of being destroyed, it’ll soon become an essential toolset that you’ll need to utilise. While the earlier levels can be beaten on raw ability alone, some of the later stages might require some additional preemptive movements, based on the learning of enemy patterns.

Presentation-wise, the game has a cool, crisp aesthetic, purposely simple to the point where you have no excuse for dying repeatedly until you master each level. While at times it can feel unfair and repetitive, getting knocked back a few levels every time you die, you’ll soon start gliding through when you know each stage inside and out, noticing a measurable difference in your ability that’s rewarding, and makes it hard to argue with the precision of the game.

THOTH’s music is extremely effective and hypes up the tension tenfold when you’re narrowly avoiding obstacles and projectiles at every turn. Encroaching, intimidating and stressful, it melds with the frantic gameplay well and tries its best to put you on edge, driving the difficulty dial up that one bit further. Great stuff.

THOTH’s Switch port includes a Joy-Con-splitting co-op mode, which is a lovely touch, but aside from that, the game is extremely barren, without even much of a menu system to speak of. Still, it’s hard to criticise a game that does exactly what it sets out to, and in a fun, if excruciating, way. Also, for those that beat the main set of levels, there is a procedurally-generated mode which adds replay value. If you’re into this sort of thing, you certainly won’t be disappointed.

THOTH is a simple, sleek arcade shooter endurance test, stripped back and designed to test your mettle, precision and skill throughout its 64 levels. While a little frustrating at times, it’s one that fans of the genre will love.