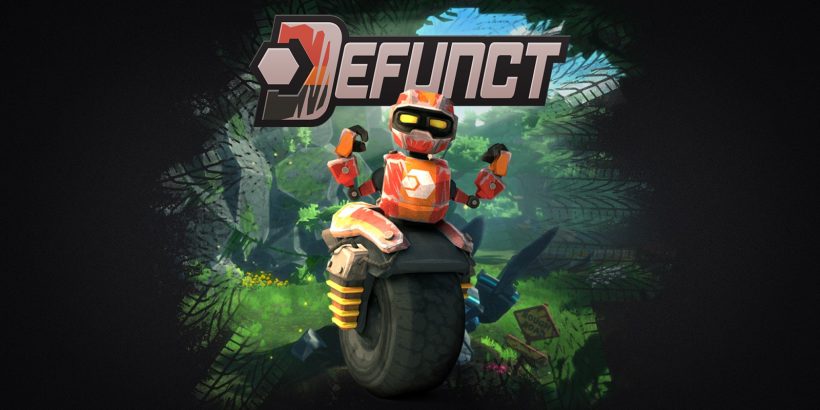 Remember going to the cinema to see Wall-E?

The lesser-known Pixar film tells the story of a solitary garbage-cleaning robot, taking viewers up close and personal with his lonely existence out in space. Defunct, from Soedesco, tells the story of another lone robot, this one having fallen off his ship and plunged to a post-human Earth. Capable of reaching impressive speeds, the robot gives chase to the ship in a bid to reunite with his fellow robots.

Given your high-speed powers, this is a fast-paced adventure, and makes heavy use of physics, if you’ll pardon the pun. The game’s main mechanic is that you’re on wheels, so coming to a precise stop can be difficult. It’s not impossible, though – you just have to make use of ‘gravitizing’, which is the robot’s way of amplifying the gravity around it so that it picks up pace very quickly when going downhill, but slows down rather abruptly when heading upwards. So, as the robot chases after his ship, he must use the hills and bumps in the environment to pick up the required momentum to successfully negotiate leaps and gaps, and avoid falling into water, which will render him obsolete.

The reverse technique of magnetising allows the robot, who has a somewhat faulty engine, to slowly tick his way up sheer inclines once momentum has run out. You’ll need to make use of this to make your way back to the loftier heights of the beginning of a run in order to pick up as much momentum as possible on your way back down, but fortunately, the game is pretty generous with the layout of its checkpoints.

It’s undoubtedly the flying downhill that offers the most fun and exhilaration that Defunct can provide, however. You just want to race through every level and watch the environments whizz by. You can’t do that, though, as there are collectibles which are very easy to miss littered across the route. This leads to arguably Defunct’s biggest drawback – the camera work. The game is a dizzying experience when played in Handheld Mode, and that’s not just because of the high speeds. When you perform a sharp turn, the camera makes a rather unnecessary jerk-come-slant for a brief number of seconds. It’s an irritation, and one that really didn’t need to be so. You just want to fly through these levels, so a clumsy camera during the slow points is a pain.

What is done well, though, is the game’s visuals. It’s clear that a lot of care has gone into Defunct, as even though you might be racing through the game for the most part, the environments that you pass through are detailed and vibrant. There are some quite stunning examples of scenery and colour use, and while the lands you see are very sparsely populated, with just a few similar robots whizzing about at such a rate that you’ll never really be able to get a good up-close look at them, the world is done well enough to encourage players to want to roll around and explore the entire thing.

But, even with all the exploring and hunting out the collectibles, it was perhaps natural that such a fast-paced game would reach its conclusion so quickly. We’re talking around 60-90 minutes for a full playthrough, and it’s just going back and fetching the collectibles which will keep you coming after that. For that reason, this is one to pick up in an eShop sale.

Defunct is a fast-paced and exhilarating experience, let down in places by camera work and the non-intuitive handling that it can cause. It’s a very short game, so check it out if it hits up an eShop sale.