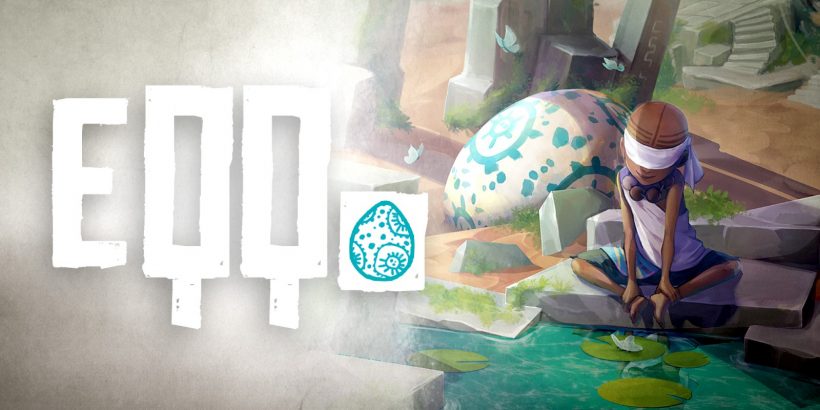 There is nothing more special than experiencing a story that speaks to you directly. Whether this be due to its themes, characters, or plot, a well-crafted story will inspire us, affect us, and maybe even shape the people we become. Although it may be short, the narrative-driven puzzle experience in EQQO is one with a story that will linger past its conclusion, leaving you moved and perhaps a little more introspective than you were before.

Inspired by Ethiopian mythology, EQQO is the story of a blind boy, Eqqo. The game follows Eqqo on his quest to return a sacred egg to the Mother Tree located deep within the heart of an enormous temple. Perhaps unusually, the story is fully narrated by Seada, Eqqo’s mother, whose eye watches over the child on his pilgrimage, and whose actions help to guide his footsteps.

This is quite literal, as you do not have direct control over Eqqo in the game. Instead, you must guide the child through the world by tapping on items and locations for him to interact with, and provide peripheral assistance with tasks such as tossing stones at enemies or activating switches.

In many respects, this tap-based gameplay resembles a point-and-click adventure, although EQQO‘s puzzles largely shy away from the conventions that tend to characterise that genre. Rather than requiring you to gather items and use these to progress, EQQO relies on your ability to directly navigate around physical obstacles in the game’s vast spaces. While the sparse, lofty spaces themselves are intriguing, controls that never quite feel natural and the game’s fixed camera locations can make them awkward to explore, which can get in the way of your movements at times.

Nevertheless, thanks to simple puzzle design, few of EQQO’s levels will pose too much of a challenge, but far from being a negative, this helps the game’s narrative to shine. The mild difficulty ensures that the pacing stays very consistent from start to finish, with the light, enjoyable puzzles serving to complement the comforting-yet-powerful tale.

And so, so much could be said on the topic of EQQO’s story. From Barbara Scaff’s emotive narration to the tale’s themes and moving conclusion, the narrative offers a touching tale that will move even the coldest of hearts. By the conclusion, the narrator manages to convey a true sense of love for her child, and it’s hard not to be affected by the poignant and bittersweet ending. Of course, everything is also accompanied by a stirring soundtrack, which helps to create a sense of immersion as you play.

That aside, EQQO isn’t perfect, and the game is home to a handful of bugs. Whether this be an outright crash or a failure to trigger key events, these occasionally require you to restart the game, or reset a level in order to advance. Minor problems such as dialogue falling out of sync with the subtitles also occur, not to mention a couple of quality-of-life omissions, such as an inability to skip dialogue you’ve already seen.

Indeed, by the end of the game, EQQO’s flaws do add up; in what is otherwise a worthwhile, memorable, and recommendable journey, they do mar the experience somewhat. It’s perhaps fitting, then, given the narrative, that you may have to turn a blind eye to some parts in order to see the true beauty contained within.

Technical issues and an occasionally awkward player experience take some of the shine off this game, but EQQO nevertheless offers an intimate, poignant, and comforting story that any fan of narrative-driven adventures will appreciate.