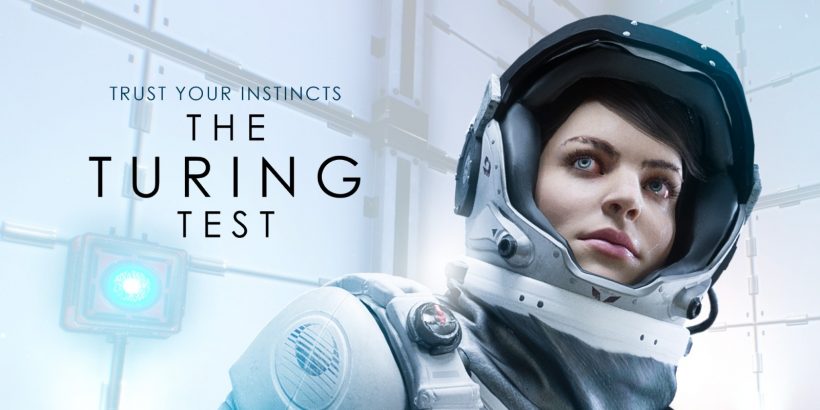 Can a machine be indistinguishable in intelligence from a human?

Movies would like us to think so – Terminator and I, Robot, for example. Alan Turing’s 1950 work on the capabilities of artificial intelligence has, some seventy years later, provided the inspiration for Square Enix Europe LTD’s first-person puzzler. Taking the role of Ava Turing, an engineer for the International Space Agency (ISA), it is your mission to investigate the disappearance of the crew at a space base on Jupiter’s moon, Europa.

Naturally, this is a game set in the future, and technology is at a super-advanced level. While the base is deserted, TOM, the station’s AI, is on-hand to guide you through the game’s story. The Turing Test is set across a run of seventy levels which involve moving energy to open doors, shift cameras and to adjust platforms, with every ten levels representing a somewhat themed sector to break the game up. Each sector has one side-level which offers a puzzle with some story reward, but they’re in no way related to progression.

Gameplay is pretty simple – players must make use of an ‘Energy Manipulation Tool’, a gun-like device with which you can suck up energy and fire it again into a new home as a means of opening doors and activating platforms. Levels are never overly complex – the puzzle conundrum comes in what order you need to move the energy orbs in order to progress to the finishing point, at which point you’ll need to have the energy to hand to be able to open the door.

Energy comes in a range of colours, with blue offering a steady stream of energy, red offering one strong burst, and green and purple providing alternating burst periods, and therefore often needing to be paired together in order to hold a door open. Once hoovered up in your EMT, the orbs are then fired out in reverse order, adding a deeper layer to the puzzling. There are also boxes you can place on square energy ports to keep them powered, but these can’t be hoovered up from afar.

So that’s the strategic element of The Turing Test. Rooms might have an entrance and exit door with a vent, so you’ll need to make sure the exit colour energy can be viewed from the vent in order to acquire it once you’ve entered the room. The gameplay gets a little different later on, when you start being able to make use of TOM’s security cameras and also robots which can help distribute the energy around. The puzzling is decently varied as a result, but there’ll rarely, if ever, be a moment where you’re totally stumped.

It’s the storytelling in The Turing Test which is really the most noteworthy aspect. There’s no sign of life in the robots unless you control them, so the space base is a very lonely place. With just the conversation between Ava and TOM acting to break the silence, it’s the imagination of what happened to the crew which is the thing that starts to take precedence in the player’s thinking, rather than the puzzling itself. There are no collectibles, no side-quests; nothing else to occupy your time. The puzzles keep you busy, but it’s being surrounded in such isolation, with only your thoughts for company, which make this an interesting take on how games can play with the players’ psyche.

The Turing Test is first and foremost a first-person puzzler, but it’s also an experiment in unorthodox video game storytelling. You won’t struggle to finish, but your imagination will be in overdrive as you work your way through it.