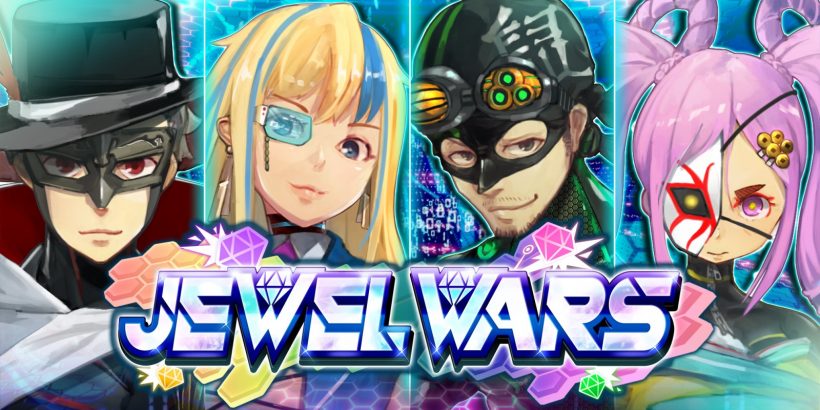 There is an abundance of anime-style games adorning the Nintendo Switch’s storefront. And while for a certain audience this is great news, some are merely cash grabs aimed at drawing in fans of this niche aesthetic. Jewel Wars is another one to add to that list.

Jewel Wars is, at its core, an action-arcade game with an overarching story. It’s the year 2039—the world’s (or maybe only Japan’s?) currency is all managed through an online network, and for one reason or another, a group of cyber thieves aims to return that money to the world. Unfortunately, a lot of the story, character names, and character designs are a bit too heavily influenced by Persona 5, therefore lacking in originality.

Levels follow a very linear path, which wouldn’t be a bad thing if they weren’t so repetitive. Each offers very little in the way of variation. You run around avoiding the enemies (or attacking them to obtain their gems) and mine the gem deposits that are then sent off. Once enough have been gathered by the player, they are free to proceed to the next level and further progress the story.

The player can shoot or lunge at the enemies, where the most important thing is to not get hit, otherwise, the time limit will decrease at a quicker rate. Should the time deplete entirely, an unmanageable number of police officers will turn up and chase you. This is, for all intents and purposes, a game over for that run. The two difficulty options (normal or hard) vary the length of the timer, and difficulty can be changed on the fly during level selection. The concept is fun in short bursts, but any more than that and the tedium begins to sink in.

Graphically, Jewel Wars is nothing to gawk at. The background during gameplay is overly busy and cluttered. The level design itself is fine for it’s arcade-like purpose—simple and stylized. Character and enemy designs during the actual gameplay sequences do not appear to fit, resulting in a jarring juxtaposition of 2D and 3D. It’s baffling to me how these character models passed beyond the concept phase.

Similarly, the music in Jewel Wars is nothing to write home about. Sporting a sort of techno soundtrack that often appears to drone on repetitively, it can and does grow tedious after a while. A little variation sprinkled throughout never hurt anyone, so it’s unfortunate that such a small change could have made the game just a bit more enjoyable than it turned out to be.

Freeplay multiplayer supports up to 4 players, with options to fill in as many of the remaining spots with AI as desired. The numerous options when selecting the multiplayer game modes make for some much-needed variation: get the most money, get the most jewels, and blast the most people offscreen. These modes can be a lot of fun.

In fairness to this game, the story and gameplay aren’t all bad. There is fun to be had here, and the story does end up taking its own direction. It is just unfortunate that the story lacks overall creativity and originality, and the gameplay doesn’t contain enough spice and variation to carry you along for the entire ride without the need for kicking and screaming (maybe a slight exaggeration). If you have friends who are similarly starved for games to play, this game could be worth a look. Otherwise, there are better games out there.

Jewel Wars was played and reviewed in English.

Jewel Wars is a game with an okay concept, decent but repetitive gameplay, and an uninspired story — topped with clashing and distracting visuals. Reasonably enjoyable, multiplayer minigames are the only thing making this game worth considering. Not recommended.