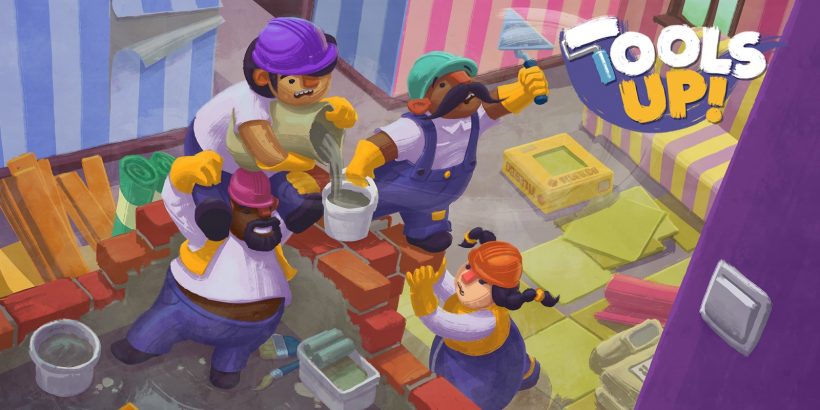 The Nintendo Switch is the perfect system for couch co-op video games, with its Joy-Con and portability allowing for easy co-op play without having to carry heavy and expensive controllers or hardware around. Naturally, developers and fans alike flock to the hybrid console to utilise this accessibility, as seen with the success of Overcooked 2, Snipperclips, and The Stretchers. Tools Up! is a quintessential co-op game that should no doubt find its place in the library of every family, flat/house, or couple who love playing games together.

Tools Up! follows a team of decorators tasked with refurbishing thirty different rooms in a strangely designed apartment complex. This involves a variety of different tasks usually seen as mundane by anyone who doesn’t have a passion in interior decorating, including laying down carpets, painting, plastering, and knocking down walls, all in a short time window.

The assigned tasks are written down on a set of blueprints, and these are vital to a successful playthrough. Whilst some of the decorating choices are not to my taste (carpets in the bathroom?), due to the uniqueness of every apartment in terms of room layout and the desired décor, Tools Up! avoids creating a gameplay loop that is too repetitive – a mistake many co-op titles make. The blueprint system can turn annoying, however, as when you get to the more complicated levels it becomes harder to make out what is required in each room and how it should be applied, especially when must be holding the blueprint and waste valuable time to access your tasks.

The difficulty scaling of Tools Up! works well for easing newcomers into a new style of gaming, perfect for a couch co-op game that is frequently played with the less hardcore gamer. By the 10th apartment, however, things get much more hectic, with slippery floors, lava, and manic dogs disrupting your attempts to renovate the apartments. Pesky deliverymen will deliver more supplies at random times throughout the level, forcing you out of the apartment to take them before he runs off, along with your much-needed supplies. It reaches a point though where this innovation grinds to a halt, and some final levels don’t offer as much challenge as you would hope. Controls are relatively simple for all ages to grasp, requiring only a few buttons on one Joy-Con. They are occasionally unresponsive in picking up and putting down items, this is made much more noticeable in a game where speed and finesse are vital to completing the level before time runs out.

What separates Tools Up! from other co-op Switch games is that there is some order amongst all the chaos. Gone is the traditional brute force carnage you might expect from a game in this genre, as once you finish redecorating the apartment you need to ‘tidy up’ all the mess you made to get a perfect score. This includes any paint spillages and waste materials you ripped up, and all the tools used in the level (including yourself), making the bin the most crucial piece of equipment in Tools Up.

New characters add an incentive to obtain a perfect score on each level other than for progression purposes, although it could have been interesting if The Knights of Unity had experimented with giving different characters unique abilities or stats to add an extra element of team-building and strategy to an already solid co-op title.

Tools Up! is the latest in co-op game to turn mundane jobs into a crazy and enjoyable experience designed to test friendships. With a few bug fixes and updates, it could become a mainstay in Nintendo Switch libraries.