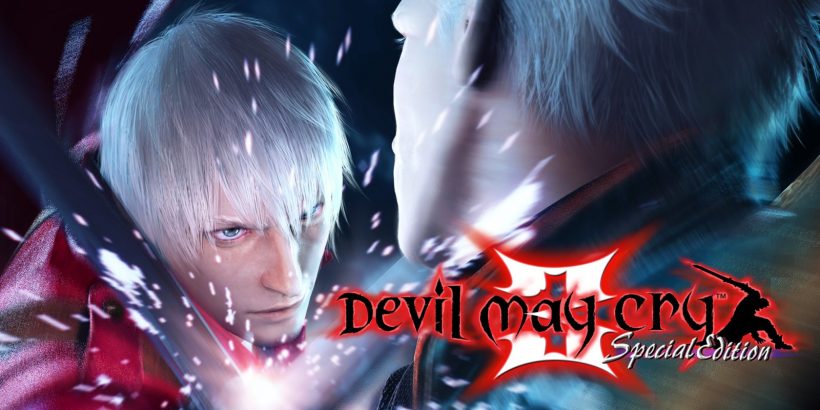 In the opening scenes of DMC3, the last of the original trilogy to be released on the Nintendo Switch, the main protagonist, Dante, is fighting off a horde of monsters whilst stuffing his face with pizza. Armed with a pistol, a sword, and an endearing outlook on life, he then proceeds to slice a snooker table in half with relative ease. He subsequently uses a single bullet to set off a chain reaction of snooker balls flying in all directions to defeat the enemies closing in. Well, if that doesn’t set the tone for what is to follow…

After a brief introduction to the deep, dark underworld and the backdrop to the ensuing story, the player is informed of the four combat styles available throughout the game: Trickster, Swordmaster, Gunslinger and Royalguard. Each plays a significant role in how the combat feels and this is the first of a few quality of life improvements from developer Capcom. Offering the ability to change both the fighting style and your weapons, on the fly is a very welcome addition to what was already a cult classic back in 2005.

In addition to the in-game customisation options, the Nintendo Switch remaster of DMC3 includes a local co-op mode entitled Bloody Palace, as well as all of the ‘Special Edition’ content that originally released during the update a year later. Mid-mission checkpoints, changes to the difficulty levels and the option to play as Vergil – Dante’s twin brother who is hoping to open the gate to the demonic realm – are all present and correct. It’s the most complete version of DMC3 on the market and it feels it too.

Taking place before the events of the original DMC, the third instalment has the player hacking and slashing their way through 20 missions which a focus on gunplay and swordsmanship – the staple of any DMC. It feels as fun and familiar as it did 15 years ago and is a pertinent reminder as to just how good the series has been, on the whole. The action is fluid and fast, the customisation makes it much more accessible this time around, and Dante is still the cocky, gun-toting and over the top character players have grown to love.

That being said, what DMC3 doesn’t have is time on its side and it shows. The remaster has done just enough to reintroduce fans to Dante and his swagger, yet the visuals could have been better. As well as this, the camera angle often leaves something to be desired and when such care has been taken over the additional features included in this Nintendo Switch version, the camera feels as though it should have been revisited. It is representative of the era and many a game fell foul to cumbersome camera controls and poor visibility, but it is felt all the more here as a remaster.

Stylish and strategic, the action in DMC3 still holds its own when up against some of the combat in the more recent hack and slash titles. It serves to highlight just how good the DMC series is, and for the trilogy to be released on the Nintendo Switch now is another coup for the hybrid system. Its quality of life improvements breathe fresh air into Dante’s story and whilst it’s 2005 origins can hold it back, there is a lot to love about this trilogy on the Switch.

DMC3 is fast-paced, fun, and familiar. It offers up hours of hack and slash goodness which is true to the original release – for better or worse – whilst also including exclusive improvements to bring it into the modern day.