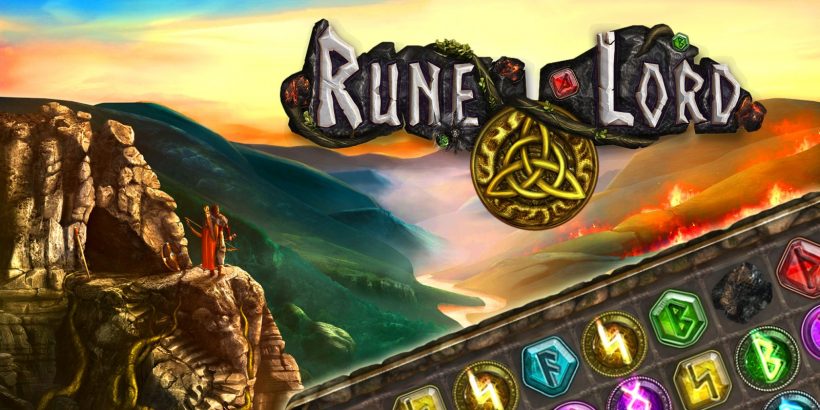 Back in the early 2000s, I played a lot of the browser-based match-3 classic, Bejewelled. Smartphones have since become ubiquitous, and as the core mechanics of these games are so well suited to touchscreen play, we’ve seen extensive variations on the theme in the intervening years. Many of these have delivered the same classic mechanics with a fresh coat of paint, while others have attempted to blend the formula with new mechanics in an attempt to reinvigorate the experience. Rune Lord is somewhere between the two ends of this spectrum, with the familiar basics combined with some slightly less common progression mechanics in an attempt to provide a new experience.

Rune Lord’s core gameplay will be familiar to many: coloured runes are arranged in a grid, and you must clear these by swapping adjacent tiles to create lines of three or more. However, the game has ordinary runes and magic runes, and you need to collect a specific number of the latter before the timer runs out in order to advance through the levels. This is something of a breeze on the game’s Casual difficulty setting, but Advanced requires significantly more speed; using the touchscreen controls is the best way to facilitate this, so it’s strange that the game doesn’t actually tell you that touchscreen controls are supported.

While Rune Lord offers a collection of additional mechanics in the attempt to reinvigorate the match-3 formula, it feels like an uphill battle at times to understand some of these. For example, you can activate spells after you’ve filled your magic meter by clearing runes, but the explanation of exactly how this works is not very clear, leading to some head-scratching moments when you’re just starting off. Once you’ve unlocked enough spells, however, using the in-game booster system, the underlying mechanics become a little more comprehensible, which helps to make the game slightly more enjoyable than it is at the very beginning.

Rune Lord’s progression mechanics are also curious. As mentioned above, each level has a specific goal number of magic runes that must be cleared in order to advance, however, some levels have three goals instead of a single one. Having tiered goals isn’t unusual in games of this type, but it is unnerving that even if you meet the highest goal on your first attempt, only the top tier will be unlocked; you must subsequently replay the same level as many times as it takes you to meet all of the lower goals before progressing, which understandably leads to significant repetition.

The repetition isn’t a negative off the bat; after all, part of what makes match-3 games appealing is their addictive, tried-and-true formula, but the generic visuals and incredibly forgettable audio become quite tiresome after a while. Getting high combos can occasionally be satisfying, but the game is rather soulless, and no amount of special effects can mask that. It also doesn’t take long to unlock all of the basic boosters, either; you can continue to upgrade these with more gameplay, but it’s hardly the most rewarding experience.

Rune Lord offers achievements as well, but these arbitrary inclusions add minimal value to the game. The title is, on the whole, quite mediocre; there are no technical issues, but it does little to offer an engaging experience. If you’re looking to spend £6.29 on the eShop, I wouldn’t suggest spending it here.

Rune Lord is nothing to write home about. Generic assets make for a fairly bland experience, and there’s little that’s interesting from a gameplay perspective to make this match-3 game stand out from the crowd.