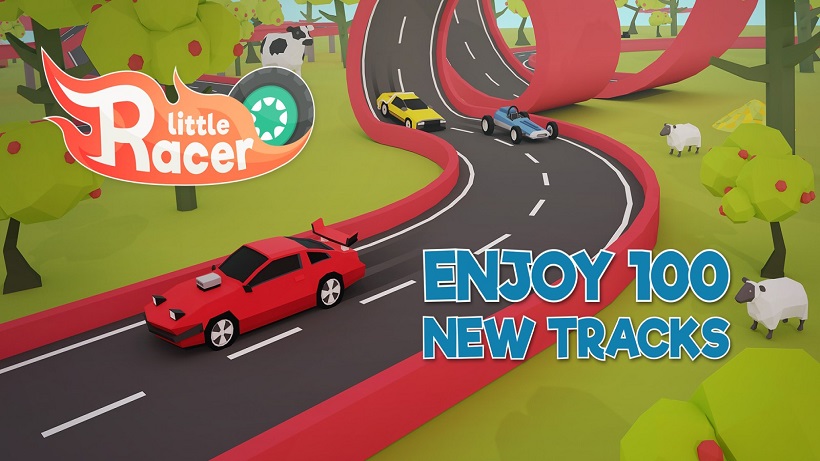 There is something about the appeal of slot car racing that still carries a warm feeling in the 21st century.

There are, of course, far more interactive options available to recreate the depiction of motor racing, but the frill of seeing the scale models race on a circuit you created can help outweigh the limited involvement in the races themselves. It’s possible, for these reasons, that there have been attempts to try and replicate and improve upon this, but in video games, we’ve not had much to work with.

An officially-licensed Scalextric game previously made its way to Switch, but the result was so dire that it left all who played it wanting the real thing instead. But what if you don’t want to spend lots of money to buy the necessary track and cars – let alone having the necessary space to construct a viable circuit to race on? Well, Little Racer is possibly the nearest thing to a half-decent video game version of this classic hobby.

Like in slot car racing, the key is knowing when to push down on the accelerator (ZL) and when to ease off. Successfully doing so in Little Racer results in a nice speed boost, but holding down for too long will likely see your car come off the track – costing you valuable track position. In addition to managing your speed around the circuit is timing when to switch lane (pressing ZR), which is necessary to avoid obstacles such as a chicken crossing the road or a yeti trying to knock your car off the track. It can also be naturally beneficial when approaching a tight corner.

The main campaign mode of the game sees you face off with three other competitors across thirty different circuits, with each circuit gradually increasing in complexity, along with adding a new theme (and new obstacles). Progression is rewarded with new cars that will have a different set-up requiring a slightly different approach to your race style.

There’s also a Challenge Mode, which in practice plays much like the Campaign mode, but a specific element of the gameplay is blown all out of proportion – though dealing with an extreme wacky mechanic comes across as unnecessarily hard just for the sake of it. The most interesting mode is the Track Editor, allowing players to design their own circuits. There’s a catch, though – you’ll need to make your way through the campaign mode in order to unlock more track parts to construct your next epic loop-filled magnum opus.

So far so good – but unfortunately it’s in the limitations of the racing itself where the game starts to let itself down. That’s not down to lack of effort or poorly implementing the control scheme; rather, the problem is inherent to a video game recreation of slot car racing. This kind of game would be fine were it a mini-game (a la a Pocket Circuit of the Yakuza series, or that one in Super Mario Odyssey), but in the long run, one’s patience for retrying a circuit multiple times after far too many track detachments wears pretty thin. It eventually becomes an endurance of learning the intricacies of each track after multiple attempts; this might be fine for some, but off-putting for others.

Little Racer is generally well-made, though, with a lot of attention having gone into the visual design and the surrounding aesthetic elements. There are the signs of a fun racer here that could be taken further with something more akin to a traditional racing sim, with the great track-building elements as an added bonus.

Little Racer has the right intentions and provides a pleasant-looking racer with a credible track builder. It’s just unfortunate that the actual racing itself is lacklustre and becomes tedious after numerous repeats of the same tracks.