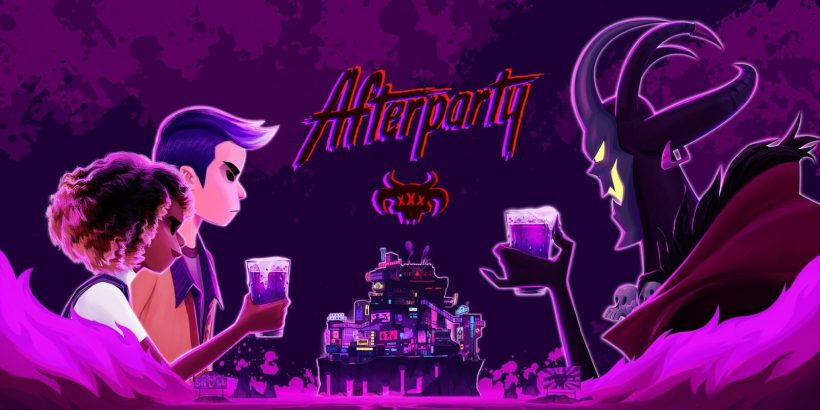 Video games are constantly envisioning unique versions of hell for players to explore. Some depict it as a wasteland, some render it as an ancient kingdom. AfterParty, however, somewhat grounds Satan’s domain, portraying it as a more identifiable metropolis full of tattoo parlours, processing facilities, and bars…lots of bars. This, you begin to discover as Milo and Lola, two recently deceased teens attempting to gain back freedom by out drinking the devil himself. It’s an admittedly fun premise, as far as graphical adventures go, but the sheen on this lens can’t hide its lost potential.

Similar in both look and gameplay to Night School Studio’s previous game, Oxenfree, this adult-orientated road to hell and back starts off promisingly. Milo and Lola are childhood friends hanging out awkwardly at a high school graduation party trying to fit in, only to soon find themselves sent to the netherworld. The reason for them being here serves as one of AfterParty’s main mysteries, leading you to question whether or not their circumstances are legitimate.

The relationship between Milo and Lola is definitely one of the major benefits AfterParty has going for it, largely due to the excellent voice work by Khoi Dao and Janina Gavankar respectively. During the six or so hours it takes to complete, not once did I struggle to buy into their comradery. This might be a narrative-driven game where your choices dictate the specific routes they go down, but in every possibility, they shine. It would have been nice to see Oxenfree’s interrupting speech system here to add a little realism, yet the performances given by this eclectic cast are still always solid.

As you may have guessed, drinking plays a part in AfterParty, though I was amazed at how minimal it ended up being. It works like this: During sequences that takes place in one of Hell’s many bars, Milo and Lola are given a choice of themed drinks to order at the bar before exploring. These run the gamut as being identified as anything from “liquid courage” to “witty vaudevillian” amongst others, with each opening up a variety of different dialogue options that can change the protagonist’s persona. It’s a cool conceit, sure, but almost always see you end up at the same story point. As such, AfterParty’s main hook rings a little hollow.

This disappointment that comes from your lack of agency in Milo and Lola’s overall story is reinforced by how much backtracking is asked of you here. Okay, the handful of locations you do get to guide these characters through are gorgeous and cleverly realised, but being asked to repeatedly traipse across them to call a cab so you can get to the next story point becomes a little grating. It’s clear that Night School Studio was hoping to offset this somewhat with some witty writing, yet it does nothing to hide the fact that you’re just constantly walking from one screen to the other.

AfterParty isn’t a bad game. However, it is one that leaves me left wondering as to why this story had to be told specifically as a game rather than a TV show or animated short film. There’s an emphasis on dialogue options, fine, but the differences these make in the plot are only ever slight. Couple this with a bafflingly underused central drinking hook and you have a graphic adventure set in a unique world with some great characters but could have been so much more.

AfterParty squanders its cool premise by forcing you through repetitive environments and selling its own drinking gameplay hook extremely short. Luckily, the story and character relationships will make this hellish road trip worth taking for some.