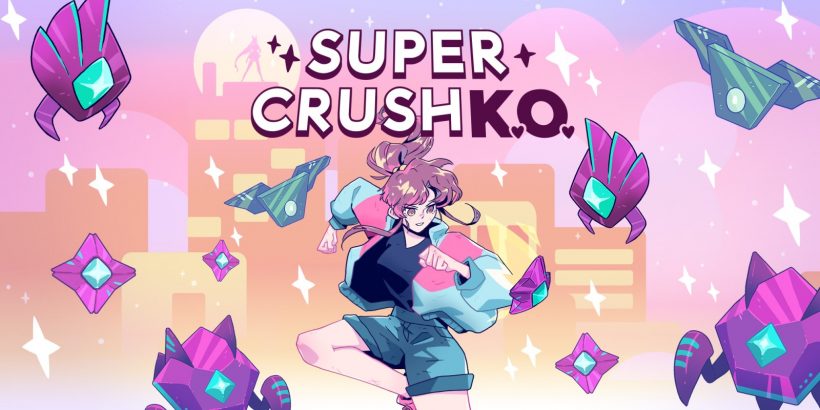 If you can take anything for granted when it comes to video games involving aliens, it’s the fact that the aliens are generally up to no good. From the invasion attempts in Space Invaders to the jump scares in Alien: Isolation, beings from other planets have a tendency to create problems for us humans. However, not a single alien has ever come close to being as bad as the antagonist of Super Crush KO. After all, what can you expect from someone who steals a cat?

With that simple (and humorous) premise alone, Super Crush KO puts the powerful protagonist Karen in a fight against an entire robotic alien army. You’ll then cross 20 different levels, punching, shooting and combo-ing many unique enemies – including some powerful bosses. Between each one of the four chapters, Super Crush KO advances the narrative with short hand-drawn vignettes. Even though the adventure is prompted by a terrible theft, the relationship between Karen and the alien Ann evolves in a lighthearted way, calling to mind stories like Scott Pilgrim vs. the World.

Super Crush KO can be described as a 2D side-scrolling brawler, with a strong arcade feel to how levels are laid out. In other words, this means that the game constantly encourages you to be fast, aggressive, and precise in how you deal with each one of the enemies, as it is constantly measuring your performance with points, multipliers, and a leaderboard. Thankfully, Super Crush KO knows its best strengths very well, and the game provides the necessary tools for the players to express themselves in the combat.

If I were to trace a more direct comparison, I’d say Super Crush KO’s moment-to-moment combat is quite reminiscent of something like Guacamelee! There, too, you have a good number of different attacks and special moves that can be mixed together in order to control your enemies and the battlefield. In this regard, Karen’s arsenal is quite extensive, and you can even use an alien gun to shoot enemies from afar (but you do need to wait for it to recharge). Super Crush KO is the kind of game that does a good job in making you feel powerful while still offering a challenging and rewarding experience.

Where Super Crush KO lacks a bit – especially if we are comparing it to Guacamelee! – is in the variety department. Due to the arcade-like nature of the gameplay, Super Crush KO’s levels have very little focus on anything that isn’t combat. You may find some short platforming-focused segments here and there, but there’s absolutely zero room for exploration. Consequently, the campaign as a whole can feel a bit same-ish, as it’s a non-stop sequence of combat action. On the plus side, this isn’t a game that overstays its welcome. You shouldn’t take more than 3 hours to get through all of the game’s levels, so the experience ends exactly at the point where it would start to get boring. And still, the combat is good enough for you to come back aiming for higher scores later if you want to.

Although eventually a bit same-y too, Super Crush KO’s art style is unique and pleasant, and it is another welcome part of this short but sweet brawler experience. Add this to the slick gameplay and the result is a great option to play in between those long blockbuster titles on the Nintendo Switch.

Super Crush KO is a 2D brawler that could be a little better with some additional variety. Still, you should have a hell of a time while its campaign lasts, all thanks to fast-paced combat that makes you feel powerful.