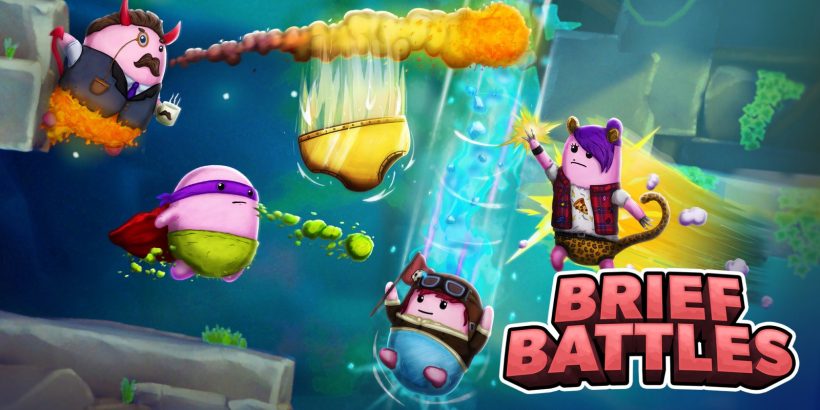 Party games are a tricky recipe to get right.

In order to get everyone excited to play in those precious moments that we’re all together, it needs to contain certain ingredients. It needs to be easy to pick up, not take anything too seriously, be unique in some way, and most importantly, it needs to be instantly fun. Two-man development team Juicy Cupcake’s party brawler Brief Battles has a few of these ingredients, but unfortunately it’s missing the spice to make it a standout choice for your Friday night get-together, especially when such high quality classics as Overcooked 2, Super Smash Bros. Ultimate and Jackbox are readily available.

Conceptually, what we have here is something really fun. Instead of firearms, explosives, fisticuffs or anything else typically derivative of the genre, Brief Battles has you picking up pairs of stylish underpants to equip any one of six adorable little chubblings with various super powers. Depending on your selection of themed nether-garments, these powers could come in the form of hurling fireballs, lightning fast dash attacks, or poison spitting. Unfortunately this battle mode for 2-4 players is local multiplayer only, and has no AI support – so be warned, you’ll need some friends to enjoy this as intended.

There are fifty maps in total, each set in one of five great-looking biomes – Precarious Peak, Crystal Caverns, Frosty Fields, Wild Woods, and Dusty Desert. Each offers a unique variation in features. Frosty Field maps, for example, have icy floors that make movement difficult. Crystal Caverns is full of razor sharp gems stones embedded into the terrain. Kills are achieved by using your superpower attacks, or by utilising a “Butt Pound” which causes you to suddenly crash downwards, and the real focus is on combining these skills with precision movement; clinging to walls and ceilings to move around the map at pace, and utilising portals, moving platforms and other gimmicks to get the drop on your opponent.

There are alternative objective based modes such as “Hold the Gold,” where you need to pick up, and survive wearing the weighted golden underpants for twenty seconds. Another chaotic game type sees you collecting as many pants as possible within the time limit, escorting them to an exit portal. If versus isn’t your thing, there’s also an option for some co-operative challenges that revolve around destroying waves of colourful critters, which take the form of jellies, worms, and other insectoids. If couch multiplayer isn’t an option for you at all, there’s an extensive single player mode, offering you challenges in the form of checkpoint races, and target practice speedruns, which award bronze, silver and gold rankings based on your performance. Ultimately however, these challenges wear thin quickly.

I can see the love that’s gone into this game, and this 2 man development team have delivered something that’s generous with the number of game-types and maps available, but Brief Battles suffers from the the most fundamental sin of any party game – It’s simply not very fun. The idea feels half baked, and the execution of the core mechanics isn’t tight enough to make it something that you’re ever likely to leap at when other, more refined options are available. If you’re looking for a cheap party game to keep the kids entertained, this might have legs, considering the cute aesthetic and amusing subject matter, but for the majority of gamers, it’s just going to feel a bit pants.

Brief Battles has heart, but loose movement mechanics, and no online play or bot functionality make it too difficult to get the most out of this underwear affair. At £12.49, it’s not all that cheap for an eShop game, either.