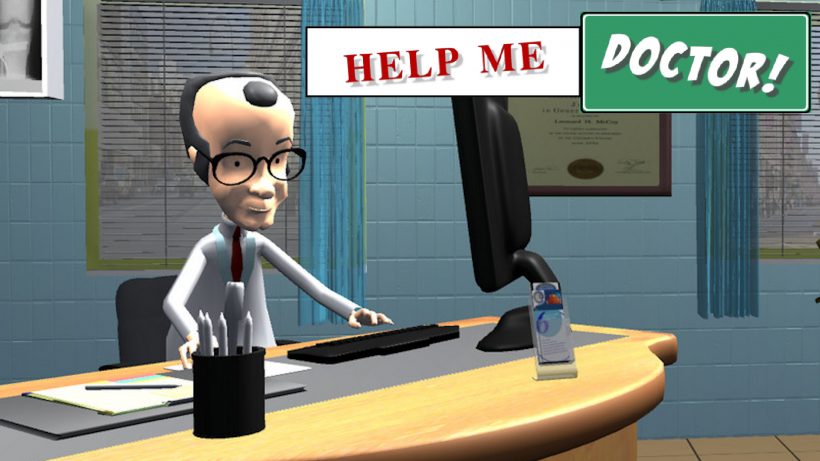 Two Point Hospital really did show us how fun running a hospital can be.

In this Coronavirus-stricken world, it’s perhaps an oddity that we get another GP surgery-focused game on the Switch, but sadly, Help Me Doctor is worlds apart from the hilarious heights of the wacky hospital-building simulator. For one, this is a considerably simpler game in practice. This facility has just two rooms that you’re able to see: the doctor’s room, and the reception/waiting area. Dealing with patients one at a time, as the doctor you must call them in from the waiting room, then read through their symptoms before cycling through your card list of possible afflictions and hopefully settling on the right one.

The thing is, you only really find this out through playing, because it’s never set out for you by way of any kind of tutorial or on-screen instructions. Holding L and R cycles the view from the doctor’s room to the waiting room, and as soon as a patient is in the chair, the camera will make a sudden cut to their documents. A busy screen shows all the possible afflictions and their symptoms (which can be cycled through), a speech bubble where the patient reels off their symptoms, and then lined up along the top edge of the screen are the patient’s medical record, ID card, and insurance details, which need to be carefully checked in case of any ‘discrepencies’ – yep, they went and messed up the spelling. You have to be careful to notice the different buttons for okaying everything and for identifying each discrepancy – as I found to my detriment when accidentally pointing out discrepancies that weren’t there with a couple of patients.

The whole thing is really, really odd though. There has clearly been an attempt to inject humour into the dialogue, but it just feels way off. Afflictions can include ‘nicely smelling farts’, ‘uncontrollable dancing’ and ‘hair coming out of foot’. Ultimate Games are a Polish company, and perhaps some more work should have gone into the localisation here because the comedy just doesn’t translate. It doesn’t help that the game’s dialogue is littered with spelling errors and mistakes, with ‘discrepency’ only the tip of the iceberg.

If the mistakes and humour are misplaced and odd, the game’s visuals are bordering on terrifying. Character models are the stuff of nightmares, and the polygon explosion that represents the textures and environments is the sort of stuff to make you howl in terror in the early hours of the morning.

Weirdly, this is perhaps the only Switch game I’m aware of that does not automatically pause itself when you press the Home button. Pausing to take a phone call right at the start of one of the in-game days, I returned to find the end-of-day screen showing, and most of my earnings whittled away. The uncared-for patients had spent the entire day sitting waiting for a doctor who was sat nonchalantly at his desk, with his fingers in his ears going ‘la la la’ until everyone went away.

Help Me Doctor certainly isn’t a game I’ll dig out of my eShop collection again. Not even the occasional multiple-choice dilemma breaking up the stream of patients can bring life to this horror show of everything that makes people queasy about hospitals. I really hope the terror the game evokes was intentional – but I don’t think it was.

Help Me Doctor leaves a mark for all the wrong reasons. From some unintentionally terrifying visuals to the lack of care given to proofreading, we’re not sure how this one got past the quality guys at Nintendo HQ.