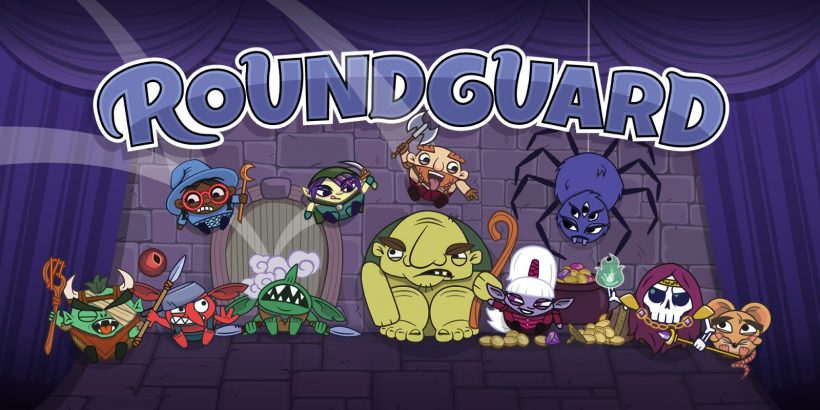 Developed by Wonderbelly games and published by The Quantum Astrophysicists Guild, Roundguard is a dungeon crawler like no other. There have been quite a lot of comparisons drawn between this game and Peggle, but in fairness, they’re on the money – Roundguard takes the Peggle formula and runs with it, adding in roguelike/RPG elements, and enough variety to keep you guessing on every run. It’s really quite clever, and it’s a ton of fun to play.

Roundguard’s premise is simple – Castle Springbottom is under attack, and it’s up to you to rescue the king and defeat the foes that stand in your way. It’s presented through a charming, stage-play aesthetic, with some of the characters dressed in costumes and garb, the levels split up into different ‘acts’, and even the tutorial on the different classes’ abilities given to you by a makeshift stage director.

Gameplay-wise, after choosing your character class, you’ll progress through a series of stages, defeating enemies and smashing pots in order to rack up a high-score and more loot to add to your growing arsenal. At first, aiming at the nearest enemy will get you through, but if you want to make it to the end of this endurance test, you’ll need to think carefully about how you want to go about each room, and which direction you want to veer off into in order to build your character’s strength.

You might think that with its frantic, pinball-esque gameplay, the three selectable classes in Roundguard won’t make much of a difference, but they actually change things up quite a lot. The Warrior class presents the most ‘tank’-like choice of the three, giving you more health and confidence to launch yourself right at the enemy. The Rogue class sacrifices health for more nuanced abilities, allowing you to sneak past foes, double jump, and even fire arrow shots from afar. The Wizard class might be the most interesting, relying on mana-based spells and tricks to keep her distance, and yet perhaps offering the most devastating results.

If that wasn’t enough for you, in true roguelike fashion, you’ll build upon your character in each run, levelling up to become more powerful, and modifying the gameplay with different items, abilities, and ‘trinkets’ – bonuses awarded to you via completing certain challenges or collecting gold. Depending on how well you do, some of these trinkets can even be carried over into your next run, helping you to succeed and make it even further based on what you’ve learned.

My only complaint is that I wished the well went a bit deeper; after a few runs you’ll have come to terms will all of the enemy varieties, and the bosses don’t offer too much of a challenge once you know how to tackle them. Those who do want more difficulty, however, can activate one of the many different ‘relics’ before starting, leveraging them in pursuit of a global high score on the leaderboard.

Overall, Roundguard is a smart idea that’s been wonderfully executed. The gameplay is addictive, the presentation is stellar, and while a few more acts and levels would have benefitted the overall experience, with randomised levels and online leaderboards, it’s one that you’ll find yourself going back to. Peggle fans that have been yearning for something similar on Switch won’t want to miss this.

Part-roguelike, part-RPG, part Peggle, Roundguard is all fun. Its strategic-yet-unpredictable gameplay will keep you hooked, and with modifiers, randomised levels and even completely different classes making each run different, you won’t get bored easily.