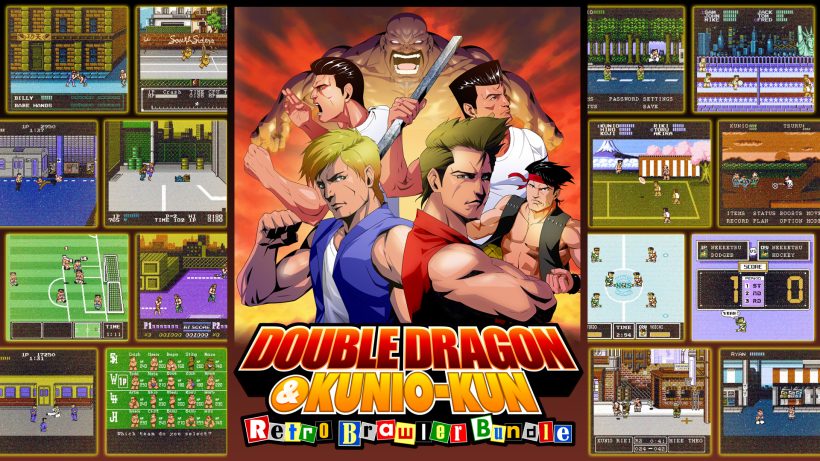 One of my fondest memories of the Nintendo Entertainment System involves sleepovers with my best friend, lots of junk food, and River City Ransom.

It remains one of my all-time favourite video games, and it essentially sparked my obsession with RPGs, open-world adventures, and beat-em-ups. Unfortunately, I never got a chance to play the majority of the other games in the Kunio-kun series. Now, decades later, I’m joyously playing Double Dragon & Kunio-kun: Retro Brawler Bundle on my Switch, allowing me to revisit River City Ransom in all its glory. What’s more, I’m able to explore some of the games in the series that never received a proper Western release. I feel like a kid again, and I’m loving it.

As the title suggests, this incredible package also includes the original Double Dragon trilogy, a series that, frankly, makes me feel somewhat inadequate as a video game enthusiast. I’d forgotten that all three games will effortlessly beat you into submission breaking a sweat. Although I’d completed the Double Dragon port on the Game Boy many, many years ago, my beat-em-up skills have become a tad rusty with age. Regardless of my inability to successfully complete the games, they play incredibly well on the Switch, and these titles gladly offer up a challenge to anyone willing to step up to the plate. Just remember to prepare yourself for punishment.

The collection also features the precursor to the Double Dragon series: Renegade. Originally released in Japan as Nekketsu Kōha Kunio-kun, the game tasks you with defeating a handful of gangs in order to save your girlfriend (if you play the Japanese version, you’re trying to save your classmate). Although the American version looks a lot different than the Japanese release, they essentially play the same way – and they’re tough as nails. I was never good at Renegade, and that hasn’t changed. I spent about an hour playing both versions before I came to the realisation that I do not possess the skills to succeed at Renegade, and I’m strangely okay with it.

For me, River City Ransom serves as the centerpiece of this collection. Included in the package is the original Japanese release, Downtown Nekketsu Monogatari, which features a different storyline and characters. Although I’ve played RCR to the point that I know the game almost by heart, having the opportunity to experience the original version felt new and refreshing. I also had a blast playing through the other Kekketsu games, particularly Super Dodgeball (which I played as a kid) and Nekketsu High School Dodgeball Club – Soccer Story.

However, perhaps the biggest thrill came from finally getting a chance to experience Downtown Special Kunio-kun’s Historical Period Drama, which takes the Downtown Nekketsu Monogatari formula and drop-kicks it straight into Feudal Japan. It’s a game I’ve read about forever, and since I’m not big into the emulator scene, I never had a chance to play it. Thankfully, now that it’s finally available on the Switch, I feel the urge to put newer, glossier titles on the proverbial shelf so I can delve into an adventure I’ve dreamed of playing for so many years.

Double Dragon & Kunio-kun: Retro Brawler Bundle is a gem. Altogether, you get eighteen fantastic games, complete with save state functionality, screen options, and “quality up” versions that provide a lightly enhanced experience. It’s a fantastic bundle for Double Dragon fans, but for River City Ransom nerds, this is a dream come true.

Double Dragon & Kunio-kun: Retro Brawler Bundle does feature games that feel dated by today’s standards, but they hold up well, enjoyment-wise, in spite of their age. It’s a wonderful package for dedicated fans and those who want to discover these fantastic gems.