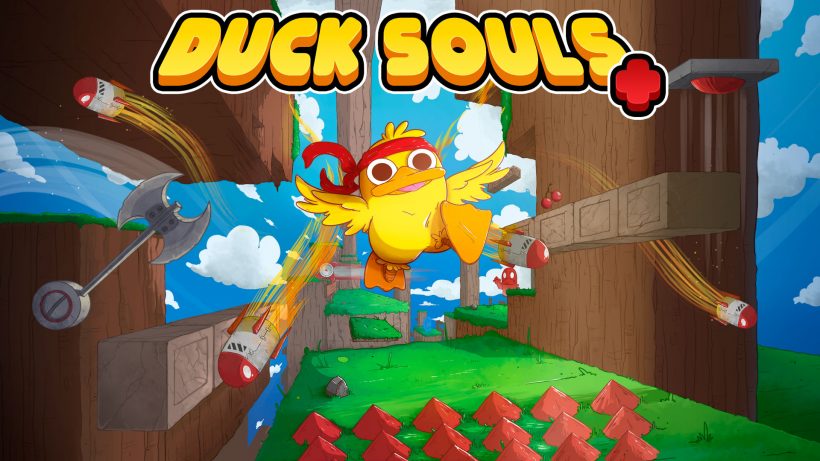 Picture a scene in which the developer of Duck Souls+ takes delivery of a huge block of marble labelled Celeste.

Working diligently in their studio, they chip away, looking to form it into a creation of their own. First, they remove the outer layers representing that emotional journey. Next to go is the difficulty level and overall challenge. After many days have passed, the craftsman steps back to admire their work, surrounded by debris that dwarfs what little remains. And what, indeed, does remain?

Duck Souls+ kicks off with a brief plot introduction, complete with a well-worn Zelda reference. Don’t expect anything like the depth and sensitivity of the Celeste storyline here, as this is the complete opposite. You’re a duck, and you need to collect eggs to save your species. Each egg is placed within a single-screen level, of which there are 100 to conquer. Levels are stuffed with spikes, saw blades and other hazards to negotiate.

What makes Duck Souls+ initially feel like a Celeste clone is the look and the moveset. The look is pixelated simplicity; it lacks some refinement but its low-res retro charm is very familiar. There’s just about enough detail in those pixels to represent individual obstacles and different platform types. But on rare occasions the pared-back visuals can be confusing, making some functional elements easy to miss. It’s also sometimes a bit too easy to confuse foreground and background. You can customise your duck by placing different hats on its head though and, really, that kind of touch makes up for a lot.

Our feathered hero has very familiar moves, too: dash and wall crawl have proven to be a winning combination for this genre, and the levels presented here are designed to make full use of them. As the game progresses, it strays into Super Meat Boy territory, via the introduction of certain environmental elements. These include missile-firing turrets, many of which get revealed once a certain switch is activated, and disappearing platforms. It never really gets so difficult as to warrant a ‘platform hell’ label, but aspects of that genre shine through nonetheless.

You might worry that ‘an easier Celeste without the story’ would lack spirit, but Duck Souls+ has a personality of its own. There’s a lot of humour present in some of the traps: those occasions where the level’s design manages to bait you into an untimely death are pitch-perfect. And the game succeeds in presenting an experience that is genuinely fun. It only takes small touches such as the well-placed checkpoints which break each compact level into even smaller challenges (these are removed in hard mode). Or the marker which shows you exactly where your dash is about to end — it might seem insignificant, but it makes a big difference. This well-polished game is all about enjoyment.

Speedrunners will delight in the instant transition between levels and there’s even an overlay timer present to show progress as you go. But the game is not too difficult and it’s short, very short. If you’re disciplined enough to start playing on ‘hard’ mode, I’d recommend it, although it’s enjoyable enough to deserve a second playthrough anyway. In fact, an hour of Duck Souls+ is as fun as an hour of Celeste or an hour of Super Meat Boy. It’s just that, an hour might be about all you get.

Duck Souls+ is simply great fun. This game is little more than a character with basic moves and 100 levels in which to use them. But those moves feel so right, and those levels are designed around them so well.