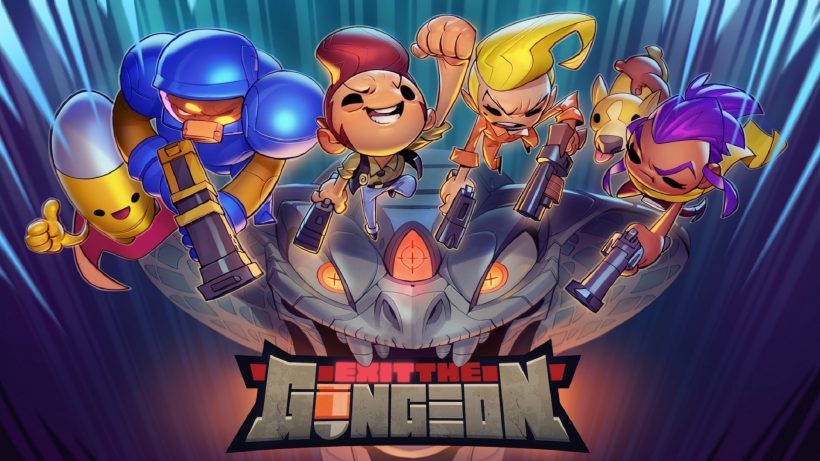 Exit the Gungeon is the spin-off to the very well received, cutesy, bullet-hell dungeon crawler Enter the Gungeon, which was released back in 2017 for the Nintendo Switch. Is it as good as the first? The simple answer is, just about.

Exit the Gungeon is a dungeon crawler – or climber – that is extremely bullet- and loot-heavy. The game continues straight after the events of Enter the Gungeon, following the ’Gungeoneers’ quest throughout the Gungeon itself. The ‘Gungeoneers’ have finally entered the Gungeon, but have quickly realised that it has become a paradox and is collapsing. Players must battle enemies throughout a course of elevators and ever-changing rooms to eventually escape.

All the things we loved in Enter the Gungeon still remain; the collecting of awesome and interesting guns, the dodging hundreds of bullets, the awesome-but-incredibly-difficult bosses; it’s all still there with a few slight changes to spice things up. Perhaps the biggest change is the battleground itself. You will spend the majority of your time dodging bullets in a very limited spaced elevator – defeat all those enemies and you will enter the next floor until entering back into the elevator again and again.

In Enter the Gungeon there were hundreds of guns to find throughout the levels and luckily, there are still hundreds of guns to be found here, with a slight difference – your gun will randomly change every few moments. At the start of the game, your gun is ‘blessed’ with the ability to magically morph into a new gun randomly; from a gun that shoots tentacles to a laser gun to a blunderbuss. It’s an awesome aspect that can sometimes make or break a playthrough because the ‘type’ of weapon you are randomly allocated changed depending on your combo – the higher the combo, the better the weapon.

So, now we no longer have the option of choosing what weapon to use throughout the game, you might be wondering if there are still ability pickups – and fear not, there are. At the end of each floor, you will unlock a chest containing a random item. This can be in the form of pets, abilities and even health drops. These ability pickups can be vital to beating the end-of-level boss. Maybe you will find a pet that helps attack?

In Enter the Gungeon, the dodge roll was your ‘panic button’, a quick press to avoid the odd few bullets. In Exit the Gungeon, it’s a button you will always be pressing. Instead of just rolling sideways you can now jump-roll vertically, which is more helpful than I originally thought it would be. Due to how concise the levels are and the sheer enemies that can be on screen at one time, the gameplay can be pretty crazy.

The graphics and audio are pretty identical to Enter the Gungeon and that’s fine. If it ain’t broke, don’t fix it, right? It still looks great and the way that pretty much everything has a face is adorable, and adorable sells. My only gripe is that because you are going from fighting in a lift to fighting in a single area, it can feel pretty samey. The levels are procedurally-generated so no two playthroughs are the same, but they have a familiar feeling. The layout of Enter the Gungeon was definitely the superior one, as there was more exploration, but other than that this is a worthy successor.

Exit the Gungeon is as crazy, manic and ambitious as its predecessor. It has addicting gameplay and the range of guns, items and enemies to experience is overwhelming. I only wish its level design was as great as the original.