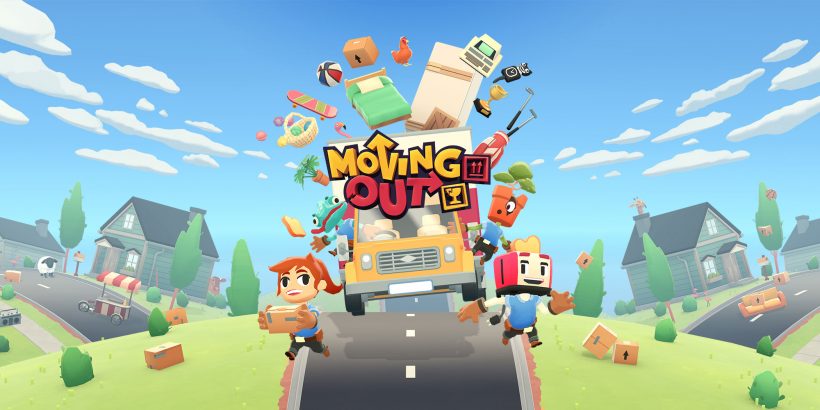 Within the opening two minutes of that wonderful reveal of the Nintendo Switch back in October of 2016, it showcased the potential of local multiplayer with two players enjoying a spot of Mario Kart 8 Deluxe in the back of a tour van.

In the few short years that have passed, the Switch has been aptly dubbed the King, or Queen, of couch co-op by many a player. With the likes of Snipperclips, Overcooked, Good Job! and The Stretchers all making full use of the pick-up-and-play nature of the console, it is easy to see why.

Synonymous couch co-op has long been the strength of Team17, the creators of Worms from way back when, and they have continued to provide experiences like this, be it through development or publishing. Moving Out is the latest in an extensive catalogue and proves once again just how important indie games are and how varied and interesting takes on tried and tested formulas can yield fantastic results.

Moving Out begins with a brief tutorial to get you acquainted with its controls before then thrusting you into the town of Packmore. As a certified Furniture Arrangement and Relocation Technician, you travel from house to farm and even airport, manoeuvring furniture, luggage and the like into your vehicle.

With gold, silver, and bronze medals available for the speed of your removal, all bets are off to get everyone moved on in the quickest time. Laden with obstacles, both static and moving, you can be as creative as you like in how you complete the job. While some items require two pairs of hands to navigate down the stairs and into the removal truck, others can be picked up by one player, thrown through the upstairs window, and caught by the second player who then places it in the truck. It’s this creativity that allows for some of the funniest co-op moments a player can have, whilst also providing an element of replayability as you look to improve your time or try a different approach.

With 30 main missions and a series of bonus ones, there is a lot of fun to be had here. Each level encourages repeats playthroughs as you unlock bonus objectives once it has been completed. In some ways, this feels a superficial way to ensure players spend additional time with the game, and it would have been beneficial to include these from the off.

Moving Out relies heavily on a control scheme which feels fluid but flimsy, and, for the most part, it works exceptionally well. The aforementioned amusement is a direct result of missteps and miscalculations, however, when you move in tandem with your coop partner, the game comes into its own.  These moments outweigh any frustrations that players will have with its unwieldy physics and increasing difficulty: moving cargo in the form of farmyard animals’ springs to mind, as does the nod to Frogger in what is one of the most inventive yet infuriating levels around.

Little has been said about the single-player experience and with good reason. You would struggle to move out of a house by yourself, and the same applies to Moving Out. It’s a couch coop title and shouldn’t be played any other way.

This physics-based moving simulator is an absolute delight. From its quirky, upbeat soundtrack to its vibrant and interesting colour palette, Moving Out has a feel-good factor to it that is only heightened by its witty humour, funky environments and moments of sheer hilarity.

Carefully curating a couch coop title that is unique and inventive can be difficult. SMG Studio has done just that. Moving Out may be challenging and occasionally unforgiving, but it is an altogether charming and enjoyable gaming experience when played with friends.