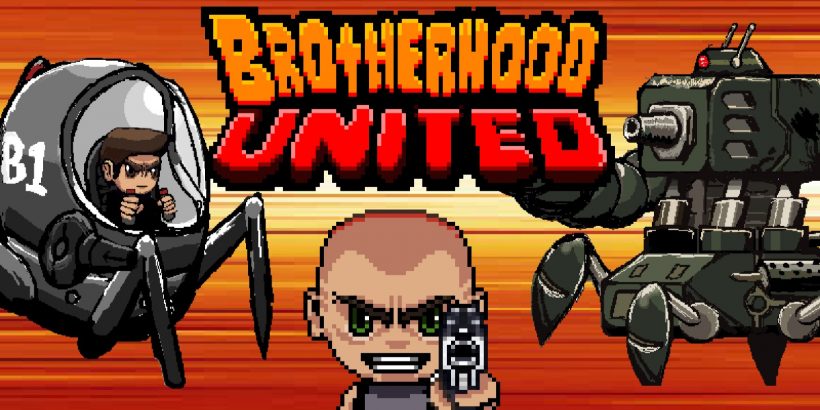 Just as its main protagonist has to throughout the game, Brotherhood United finds itself fighting on two separate rival fronts simultaneously.

First there’s Cuphead, an evolution of the run ’n’ gun mechanic in a truly gorgeous-looking package. But sneaking up to pop a cap from behind is the very game Brotherhood United pays homage to: Metal Slug, which is available on the eShop and at a lower price too. Does this shooter have enough in its arsenal to take down both?

Unfortunately, the first impression isn’t the best. Brotherhood United opens with a cut-scene animation that feels too gory despite its cartoon rendering. Prepare to watch a human head getting blown clean apart every time you start the game. Moreover, the first few levels consist of basic, uninspired left-to-right action which won’t win over many new fans. Things do pick up after this slow start, but we’ll get to that in a minute.

The setup here is straightforward: rescue your captured comrades by shooting everything that moves. You get a basic gun with ammo, a knife for close combat, grenades, and a predictable set of moves including a forward roll to avoid damage. The first thing to strike me about the mechanics on offer was the unsettling lack of momentum on landing. Your character lands on the floor like he’s landing in treacle — it’s a wonder he doesn’t just face-plant straight into the ground. However, the eight-directional aiming feels just as fair as it should whilst maintaining a challenge, and the fast-reload mechanism which tasks you with stopping a moving gauge at the right time is a nice touch.

Just as those first few levels start to drag comes the introduction of an armoured mech and things start to look up. But the mech’s lack of speed or real power highlights one of my main misgivings with the game: action is weighed down by an absence of urgency in several areas. Jumps are slow, gravity’s low, and in many situations it’s easy to cower and tackle combatants one-by-one. This also takes some of the edge off the fast-reload system.

Overall, though, later stages are much more interesting with more varied level layouts and some environmental hazards alongside the NPCs. The sound effects do a good job of portraying the chaos — maybe better than the action itself — with the noise of reassuringly solid shots and reloads.

The bosses are easy, even when they get quite elaborate, and the game as a whole isn’t particularly challenging — I didn’t encounter a game over until near the end of the second world, roughly halfway through the game. Having said that, this game is what you make it. You can find success with a pacifist approach, simply jumping and running at full pelt past many obstacles. Or you can master the controls and take each enemy down with the ease of an action hero. The game rewards various aspects of play with separate star ratings, so a combination of tactics is necessary unless you’re just trying to finish the game as quickly as possible.

If you can persevere with the early levels, Brotherhood United will reward you with some decent gunning, jumping action with a few sections even vaguely reminiscent of MegaMan gameplay. You’ll get out of it what you’re prepared to put in, but Brotherhood United is a decent enough experience for any run ’n’ gun fans who can’t have too much of a good thing.

Brotherhood United‘s target audience is unclear – purists have better alternatives available and newbies probably won’t be sold on the genre by the flaws on show. Still, this is a decent enough game for a couple of hours at most.