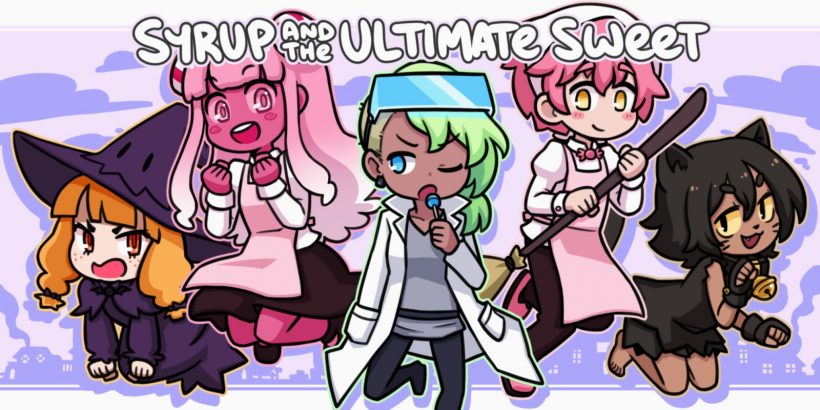 I’m a big fan of the visual novel.

It’s still something of a niche genre in the West, although offerings from series like Phoenix Wright, Zero Escape, and Steins;Gate have all helped to pave the way for the genre to gain a larger following over the last few years, and we’re seeing more and more releases as a result.

Syrup and the Ultimate Sweet is the latest newcomer in the genre to hit the Nintendo eShop, offering uncomplicated storytelling wrapped up in a colourful package of candy and magic. The story follows the tale of Syrup, a candy alchemist who wakes up one morning to find that a magical candy golem has appeared in her factory overnight. Highly suspicious that her long-time rival has created the golem to spy on her, Syrup sets out on an adventure that may or may not end well, depending, of course, on your choices.

From the very beginning, this game doesn’t really take itself too seriously. It’s fairly over-the-top when it comes to the narrative, setting, and colourful aesthetic – but then again, this isn’t a surprise for a game that’s quite literally about a mysterious magical candy girl.

From a gameplay perspective, the structure follows a familiar pattern, whereby choices made at different junctions influence the development of the story. This simplicity is not a bad thing in and of itself, but in Syrup and the Ultimate Sweet, there’s a creeping sense that you’re really just going through the motions – the story itself just isn’t all that gripping, which is always going to be a disappointment for any sort of narrative-driven game. Indeed, while some of the endings are a touch darker than you might expect for the aesthetic, the plot beats are largely predictable, the character development isn’t all that memorable, and there are numerous points where the dialogue just doesn’t feel natural.

It’s unlikely, then, that the story alone will compel you to reach all the alternative endings. Nevertheless, the game does offer an ending list with corresponding guides which spell out the decisions you’ll need to make in order to unlock each one. It’s an effective if inelegant solution to the classic visual novel problem of how to facilitate multiple ending unlocks without excessive tedium, although it admittedly feels clumsy in light of the fact that you’re not able to jump directly to decision points from a menu unless you’ve manually saved them.

However, there is a handful of quality of life additions which do help to smooth over the experience somewhat. The first is a skip mechanic which hurtles through text at the press of a button, making it easier to unlock those extra endings with minimal repetition if you so wish. The second is the inclusion of a font option for dyslexia. Not only is it welcome to see developers including accessibility options in general, but the default text was pretty hard to read, even speaking as someone without dyslexia. While both options are still quite stylised, the special font increases legibility, helping to make the experience more enjoyable than it otherwise might have been.

But of course, this isn’t enough to save a game whose core experience is really only fair-to-middling at best, and this is fundamentally what Syrup and the Ultimate Sweet offers. Just like candy, the narrative is ultimately not satiating enough if you’re looking for something with a bit more substance.

Syrup and the Ultimate Sweet £4.99

Syrup and the Ultimate Sweet is a short, light visual novel. It’s a passable choice if you’re looking for something in the genre, but its fairly flimsy narrative won’t win it pride of place in your collection.