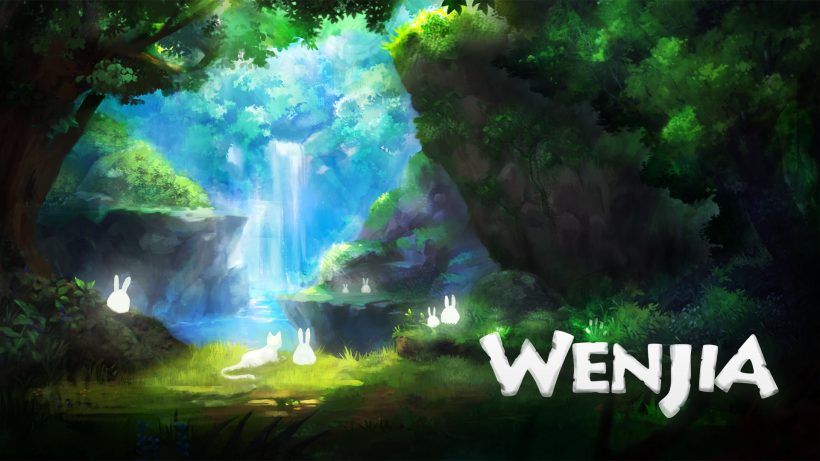 In the oversaturated world of platformers, new titles need to be able to stand out and offer new mechanics if they want to succeed. Thankfully for Wenjia, its realm-jumping gameplay and stunning graphics help to build a solid platformer on the cusp of being a must-play title.

The world of Wenjia is a truly fascinating, albeit under-explored, story that takes place in two realms: the realm of energy, and the realm of matter. When an earthquake threatens the Energy Realms, Wenjia, a cat-like entity, is tasked with bringing the other spirits (that look like bunnies) to safety. As you progress further into the caverns, various cutscenes and bodies of text will act as exposition, diving into the Wenjia’s backstory and why this disaster had come to be.

Wenjia has the ability to travel freely between the two realms, which is the focus for most of the gameplay. Shifting between these two realms uncovers new platforms, portals, and currents of air that allow you to avoid falling to a spiky death below. Much of the skill needed is in remembering where these extra elements are located, as you must rely on leaping into the unknown to progress through the stages.

While this is the only real mechanic utilised in Wenjia, it is by no means an easy or simplistic game. What starts off quite slow quickly becomes a more punishing experience when air currents are introduced as you must time these shifts between realms perfectly to avoid dying. Luoriver Studios were smart to include a cooldown on this ability, too, as this stops you from just spamming L and hoping for the best.

I have nothing but high praise for Wenjia’s art style. It is simply beautiful. The character designs draw on the style of Ori and the Blind Forest, but what really stood out to me was the background. These hand-painted scenes emphasise the contrast between the damaged, chaotic Energy Realm and the more tranquil Matter Realm, accompanied by a melancholic piano soundtrack urges the player on through the levels. It was this shocking contrast between the realms that gave me the motivation to continue onwards and free the spirits from their torments.

The art design is, however, held back by the overall pacing and content of Wenjia’s plot. The idea of the two realms, devastated and damaged by a group who attempted to absorb the power from the Energy Realm for their cities, has huge potential but was ultimately under-utilised by the game. The details you learn of Wenjia’s world add nothing to the gameplay, which does start to feel rather slow once you learn about the urgency of the situation the Energy Realm is in.

This storytelling is not helped by some pretty poor translations. Luoriver Studios’ localisation was plagued by various grammatical errors, spelling mistakes and sometimes outright nonsense. This was especially frustrating as these text boxes were the only way to learn more about the world, and it felt like I missed out on key pieces of information as a result.

Regardless, I very much enjoyed my experience with Wenjia. Its overall aesthetic makes it a worthwhile purchase for both fans of platformers and the hand-drawn style of art. I would urge Luoriver Studios to explore the backstory of Wenjia and its two realms in more detail, perhaps in a different genre so the narrative of this world can get the attention it deserves.

Wenjia is a visually stunning title with a unique realm-shifting mechanic. The contrast between the two realms is hauntingly beautiful, but the story behind this world will ultimately go down as a missed opportunity for more.