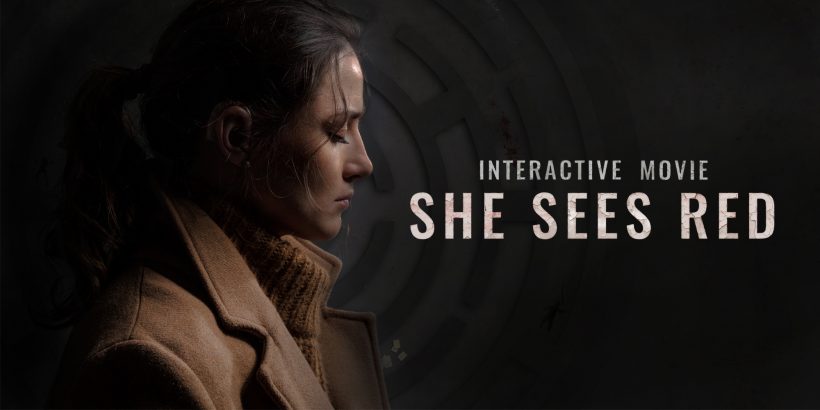 When Black Mirror’s interactive episode Bandersnatch came out, many viewers began wondering if interactive movies would become a more frequent occurrence. While a brief glance at today’s Netflix offerings indicates that there’s been little change there, She Sees Red offers something in this vein for the Nintendo Switch.

She Sees Red is an interactive movie that starts with homicide in a nightclub. An investigator who has received a tip-off leads the narrative, picking up clues from the environment as she goes. For the most part, the game plays out just like a traditional acted film, although the occasional quick time event in flashback sequences allows you to dictate the murderer’s actions.

Quick time events tend to get a bad rap in games, and She Sees Red will do little to change that. Rather than having choices mapped to specific buttons, you make your selection with the joystick, although you’ll have to trigger it twice to select the right-hand option for some reason. This is obviously slower than a single button press, and given that most of the buttons aren’t being used for anything, it seems needlessly fiddly.

She Sees Red instructs you to play through at least twice to get the full story, which is quite doable given that a single playthrough lasts roughly 40 minutes. However, even after making different choices in two playthroughs, I’d only unlocked about half the game’s scenes; playing a third and fourth time revealed only a handful more. Eventually, I was able to trigger a meaningfully alternative ending, but in the absence of an in-game decision tracker, getting there took significant repetition and trial-and-error. Thankfully, you do unlock the ability to skip already-viewed scenes, but to trigger each time jump you’ll need to mess around in the menu. This makes vague sense given the game’s mobile roots, but it’s nevertheless inefficient.

The feeling that the interactive elements of She Sees Red have been designed with a non-console user in mind also extends to the user interface. There’s only a faint brightening of the font colour to indicate which menu item is selected at a given time, and this, in fact, led me to accidentally change the text language to Russian at one point. The interface will be less of a problem if you’re using the touchscreen controls, but there’s no way around it when playing docked. A quick note on the settings, though: subtitles are available in a reasonable number of languages, and you can also change the audio between the dubbed English and the original Russian if you so wish.

Unfortunately, the story itself isn’t quite gripping enough to allow you to look past the user experience flaws in She Sees Red. The characterisation attempts to paint the detective as a modern Sherlock Holmes in terms of her ability to walk into a room and deduce exactly what happened by mere observation, but in my first playthrough, this was unconvincing to the point of disrupting immersion. The story does improve once you’ve unlocked more scenes (and there are also some great one-liners), but the issues raised above make it harder to enjoy this one than it should be — and that’s before the crashes and stuttering frame rate.

Fundamentally, the narrative experience of She Sees Red isn’t bad, but this port hasn’t been designed with console users in mind. If you’re interested in picking it up, you’d likely enjoy it most on mobile or Steam.

The story of She Sees Red is worth it if you persevere, but the experience leaves much to be desired if you’re playing docked. And it’s a movie – who wouldn’t want to watch it on the TV?