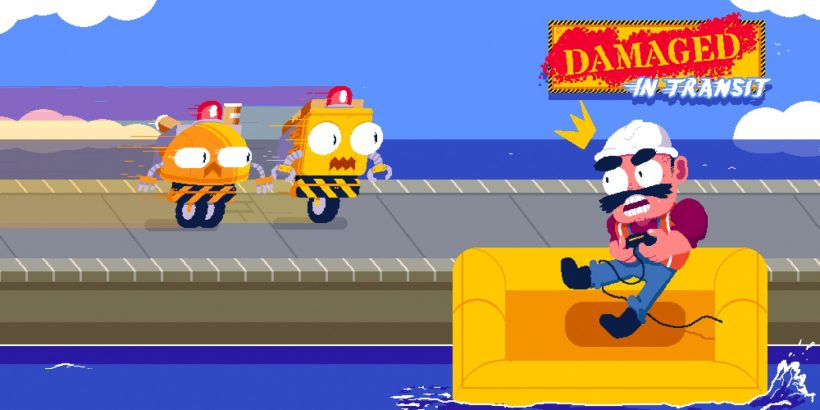 Many consider Tetris the archetypal puzzle game; a perfect test of powers both cognitive and reactionary. Damaged In Transit offers a more complicated premise, but does it provide a similarly perfect match of skill and thought?

Your objective is to guide two autonomous workers around a top-down grid from their starting points to the finish, keeping them on track and avoiding obstacles along the way. Both robots walk obediently straight ahead until landing on an arrow tile, at which point they’ll turn and move in the direction of that arrow. The controls are simply the four d-pad buttons to set all arrows in a single direction when pressed.

Herein lies the difficulty: all arrows point the same way, and with two separate robots to keep an eye on at once, changing the direction of one might inadvertently ruin the other’s day. And that’s before obstacles such as spikes, locks, broken arrows and flame-throwing baddies are added.

Once you get into the swing of things, it becomes apparent how much potential for frustration lurks within this game. Both robots arriving at arrows simultaneously is usually a recipe for disaster, so time-management is very much something you’ll need to get on top of to progress. Some spikes react by toggling on any button press which means you’ll need to rapidly consider multiple effects from a single cause.

Damaged In Transit also has a two-player mode: yes, a two-player mode for a game in which one player usually controls two characters, albeit indirectly. The creators’ solution is to give one player left/right controls, and the other up/down. This didn’t seem viable in the slightest until I tried it — and discovered a hilarious new co-op experience.

Co-op games are always good fun when players end up shouting instructions (or desperate requests) at one another, and many of the levels in Damaged In Transit work very well in this mode. They don’t just divide the responsibilities neatly in half; one of the most effective early levels in two-player mode is one that requires one player to do most of the work until the very end when it’s all on the other player to time their contribution to perfection.

Getting stuck in a game can be enormously frustrating — if there’s no obvious way of making progress, there’s often no option other than just giving up. Puzzlers, in particular, can fall foul of this problem simply by assuming each level’s solution will be identified by the player, eventually. They then need to walk a tricky line to create a meaningful challenge which can still be beaten by most of the audience.

Games such as Baba Is You tackle this by giving the player some choice over which level they play next, offering an easy ‘out’ were they to find themselves stuck. Damaged In Transit takes a different approach just by offering a selection of speeds — and this very nearly works. It definitely helps take some of the edge off the trickier stages, but the game’s difficulty curve is still too steep, too early on. That shouldn’t put everyone off, just be aware of what you’re getting into!

There’s potential for further adjustments in the name of helping the player: a pause screen which doesn’t obscure the level would go a long way, as would a turn-by-turn mode. Ultimately, though, Damaged In Transit is great for hardcore puzzle fans who don’t mind a slightly repetitive challenge.

Damaged In Transit is a fun but very challenging puzzler. It may not be staggeringly innovative, and it’s certainly too difficult in parts, but two-player co-op mode is a delight. Sadly, it’s also a bit overpriced.