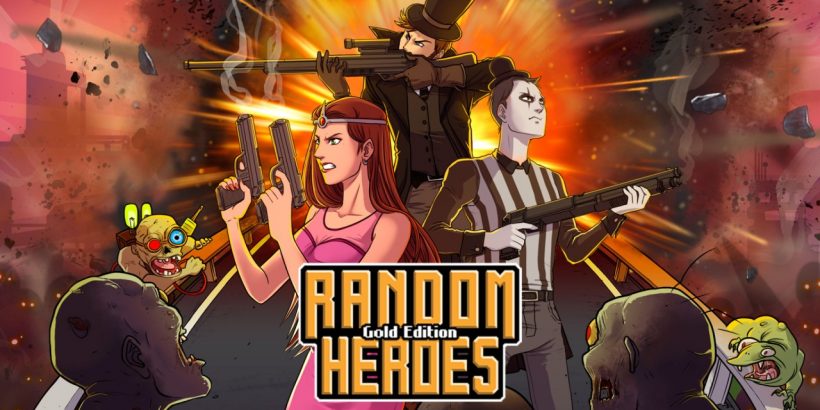 Many people find beauty in simplicity.

Taking a concept and distilling it down to its foundation while retaining something engaging takes careful planning and sharp execution. And, for the most part, Random Heroes: Gold Edition does an admirable job taking the elements of a typical run-and-gun platformer and stripping away the complications and pretence. The game doesn’t come close to doing anything remotely interesting as a platformer, but it’s a solid casual experience at a very reasonable price point.

I’ll preface this review with a word of warning: If you’ve signed up for Random Heroes because you want an intense, in-depth story, you should back out now. Basically, a group of random heroes must save the world from alien invaders – that’s it. The heroes, as the title implies, have a completely random quality. Is that Abraham Lincoln sporting a shotgun? Did Jason Voorhees just purchase an assault rifle? And what is that pirate doing with advanced futuristic weaponry? Everything about this game feels entirely random.

But, honestly, that’s fine. Given the lack of story, the developers don’t need to justify why someone dressed like Abraham Lincoln (or possibly Abraham Lincoln himself) decided to grab the nearest firearm and begin raining bullets down upon his otherworldly adversaries. The lack of story almost seems to work in favour of the game’s nonsensical nature; you don’t need to explain why the world, characters, and weapons feel so random if the very nature of the game itself embraces an air of randomness. Maybe I’m going too deep here.

Since the story has brazenly skipped town, Random Heroes lives or dies on the strength of its gameplay. Again, the experience doesn’t break new ground, nor does it even come close. Instead, the developers have taken the simplest run-and-gun concept and tightened it to the best of their abilities. As a result, Random Heroes features responsive controls that do exactly what they should – and not a drop more. It’s a very admirable experience from top to bottom, though, it’s important to temper your expectations at the door. Platformers don’t get much more basic than this, and if you’re a master of the genre, you’ll blow through this one with ease.

What Random Heroes lacks in challenge and depth it makes up for in quantity. You’ll jump and shoot your way through over 100 levels of middling variety, blasting an assortment of generic, bullet-sponge enemies along the way. You can gain a total of three stars per level based on your performance, and stars allow you to unlock additional random characters. The coins you collect throughout your travels, meanwhile, provide you with currency to purchase new, more powerful weapons. But don’t expect anything too deep; while the guns do feel different, you won’t see any difference between, say, Jason Voorhees and Abraham Lincoln.

Random Heroes: Gold Edition lands right in the middle of the road. Genre veterans won’t find anything noteworthy here unless they just want a casual experience to help them unwind. However, if you’re new to platformers but feel intimidated by the complexity of other titles, Random Heroes can help ease you into the genre. Everything works as it should, and it’s a pretty good bargain for its price point. If you don’t mind the simplicity, the generic design, and the utter randomness of the package as a whole, Random Heroes: Gold Edition should help you mindlessly burn through a few hours of a lazy weekend afternoon.

Random Heroes: Gold Edition certainly has its charms, though chances are it won’t impress those who want an original platformer that pushes the genre in exciting in new directions. That said, it’s a perfect entry point for newcomers.