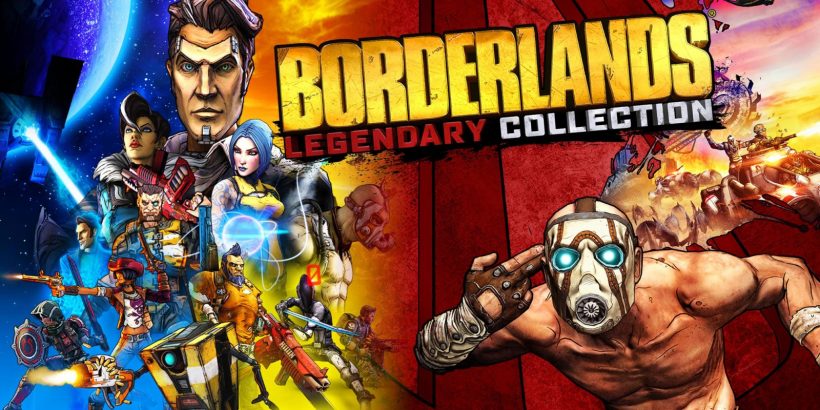 It’s been a long time coming.

The original Borderlands game was a multiformat 2009 release which seemed to make an appearance on every platform other than those put out by Nintendo. 2K followed the first game with two more: Borderlands 2 came out in 2012, some two years before Borderlands: The Pre-Sequel, which told a story which bridged a gap between the two games. Borderlands 3, meanwhile, came out in 2019, once again with no Nintendo version in sight. The first three games are the contents of Borderlands: Legendary Collection, all released physically on the Switch for the series’ Nintendo debut in 2020. Hang on – that’s not right. Nope, it turns out that just one of the games, the first, is on the cart, while the other two require eShop downloads even if you buy the physical.

So, for all the Nintendo fans who are new to the series, Borderlands is an action role-playing first-person shooter video game. Yep – it rolls off the tongue. More simply, this is a blend between an RPG and an FPS, and while the game was raved about on its first release, it’s certainly not a title for everyone. Those players familiar with shooter series like Call of Duty will be used to story playing a sizeable role in the single-player experience. In Borderlands, though, things are completely different. In the first game especially, storytelling is super-subtle, with missions essentially collected from a bulletin board before your party sets off traversing the map in search of the objective marker.

It’s this trek which made me wonder what all the fuss was about. The general gameplay is largely the same in all three games – you progress towards the objective, and duly get mobbed by legions of enemies of varying types. Shooting them obviously earns your XP, but soon becomes a massive chore, not least on account of the ineffectiveness of the weapons. Enemies will move out of the way; shots will fire waywardly, and the irritation builds pretty rapidly. Sniper rifles are the hardest to use, with even enemies right on the crosshair managing to avoid damage on direct hits in cases. But making things worse, enemies continue to destroy your health bar even if you’re retreating. If the bar empties, you then have a countdown where you need to pick up a kill to resurrect yourself even though your movement and aiming is restricted, and removing the ability to move has a very uneasy, frustrating effect.

And this happens repeatedly. My player two, who initially enjoyed the first game, became sick to death of being gunned down and warping back miles away to the last checkpoint over and over again when there was no real enjoyment in the shooting action. My patience had gone far earlier.

Speaking of movement, after unlocking a vehicle, the movement controls are again irritating, requiring you to point the camera in the desired direction of travel and then push the control stick forward or back, rather than the traditional and expected left/right controls the majority of games have used since control sticks were a thing. Crashing into tiny rocks was far too common, and losing the vehicle altogether was all-too-easy. Objectives will turn out to be either an item to collect, a set number of enemies to defeat, or a boss to vanquish, but the journey to them will remain the same.

Up to four players can play together in co-op either online or locally, but the online offering is the superior choice for a number of reasons. Firstly, a side-by-side split of the screen for two players is really restrictive to your vision, but when a lot of the story is told through audio sound-bites during the gameplay, it really doesn’t make a whole lot of sense that these can be drowned out by one of the players talking to an NPC, or even through using one of the vending machines responsible for restocking health, weapons and ammo. The co-op nature of the game means you can progress through the campaign at your own pace and others can join your game to assist as you wish, but the levelling up aspects of the player characters means that unless you’re at a similar level as your co-player, the game will scream at you that it will be nigh-on impossible to carry on.

The worst aspect of all, though, is simply trying to start a game in split-screen co-op. For some reason, the user interface on the start menu insists that the second player log in with their own Nintendo account, and the guidance of how to set up the split-screen and get a game going is hazy at best. What’s more, if you make some progress through the game, close it to play something else and then come back to it later, the second player’s progress can initially and horrifyingly seem to completely disappear. When this happened to me, I was just about ready to give up on the game completely, before I accidentally stumbled across the character select screen, hidden away with one character in player 2’s name with the levelling-up still intact.

With two Borderlands titles to go, that was almost enough to wane me off the series entirely, but things became even more complicated for the second game, as this time the game outright refused to allow a second player for split-screen unless the Switch was set as the primary console for the main Nintendo Account. Whatever happened to the days of sitting down to play a game, plugging in two controllers and getting into it? The world’s gone mad.

And don’t get me started on the god-damn pest that is Claptrap, your robot guide to the game. I never want to hear his egregious wailing voice again.

Despite the hype, Borderlands Legendary Collection never once delivered the thrills and spills I expect of a shooter. Irritations in the controls, the general gameplay, and the plodding storyline reduced my enjoyment to a minimum.