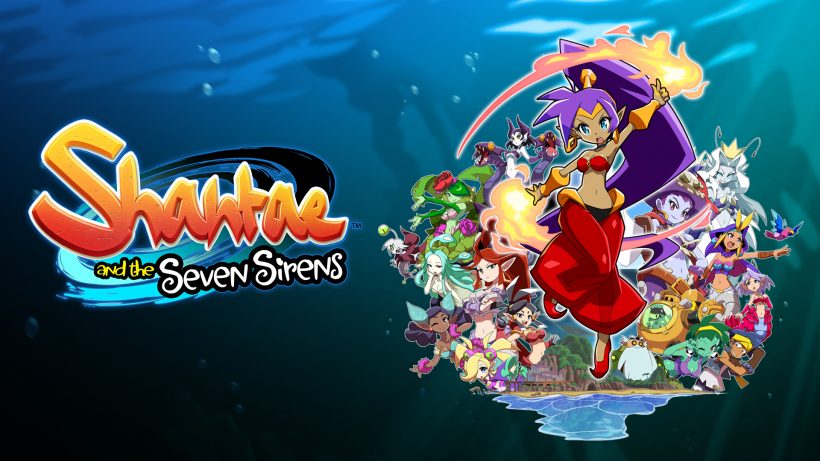 Maybe it’s because the developer behind it, WayForward Technologies, is primarily known for making licensed games, the art style is a little too ‘cutesy’ for some people, or another reason entirely. Whatever the case, those yet to experience it are in for a treat with this newest release. Not only because Shantae and the Seven Sirens seamlessly meshes all the best elements of previous entries together, but also due to its introduction of clever new ones that help this magical 2D platformer play better than ever.

It doesn’t take long for Shantae’s latest to wow you with its exuberant charm. Upon loading up the game you’re instantly treated to a gorgeously animated cut-scene, preparing you for the Saturday morning kids TV show-esque adventure you’re about to embark on. This story this time around similarly reflects this, following Shantae and friends’ visit to a tropical island paradise where the hope to attend the legendary Half-Genie festival. Before you know it, though, terror strikes, and the other five half-genies are kidnapped. Time for Shantae to step up and find them!

From here it’s all about exploring this mysterious island, acquiring new abilities that let you access new areas and completing tasks that make you a stronger, more versatile magical being. I’m hesitant to call Shantae and the Seven Sirens a metroidvania explicitly as you rarely visit most areas more than once, but an element of this genre DNA is here. Previous Shantae games have followed a similar formula, but Seven Sirens differs in that all-new fusion abilities sees you transform into other creatures. Turning into a newt gives you a simple dash manouvre, while being a turtle lets you ram through rocks.

Adding to this variety is the incredibly diverse map. Above-ground towns act as hubs, but the bulk of your navigation is spent underground. From shadowy research labs to dank sewage systems, Shantae and the Seven Sirens always surprised me with its six or so distinct locations. The same can be said for the multiple enemy types, which offer a harder challenge than the art style would indicate. You can always stock up on health and magic potions to stay alive, sure, but it’s far more satisfying to knock them out and navigate labyrinths without being touched.

The one drawback to this challenge is how easy to become flush with currency throughout this 8-hour journey. I’m not lying when I say that gems pop out of almost everywhere, and several times while playing did I have more than I knew what to do with. Seven Sirens encourages you to buy new powers at towns as they become available, but I was reluctant to give up my near-unbeatable homing missile. Why would I spend gems on something lesser?

Luckily, one of Shantae and the Seven Sirens’ other mechanical ideas works a lot better. You see, at any point after defeating enemies they might drop a card. Collect enough of them from that specific type and you’ll have the option to add an augment. Crawl slightly quicker, fire missiles faster… all fifty provide subtle albeit appreciated bonuses and up to three can be slotted in at any one time.

Shantae and the Seven Sirens proves that this cult series is still on top form, delivering delightful and colourful platforming thrills while being full of inventive ideas that prevent it from becoming stale.

Shantae and the Seven Sirens represents the very best this charming series of 2D platformers has to offer, offering fun exploration and cool abilities in spades.