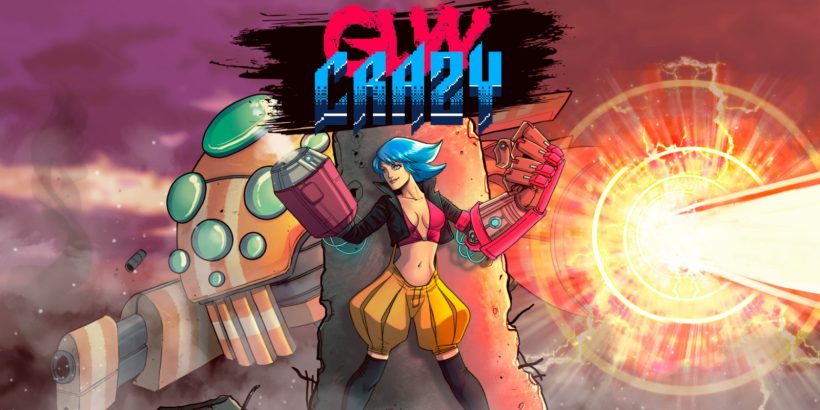 In the crowded aisles of the Nintendo eShop, a good choice of title for a new release can go a long way in helping a game stand out from the many products on offer. Gun Crazy is a rather generic choice of words, but it is true enough that there are guns in this 2D arcade-style homage to the legion of classic run ‘n’ gun shooters that have preceded it.

Like the games that inspired it, Gun Crazy requires careful aiming with frantic dodging; keeping yourself out of the firing line while trying to clear as many of the enemies as possible.

The pixelated sprites and backgrounds are gorgeous, and the female character under your control (“the fiercest lady in the police force”) is quite an agile avatar. She can run, crouch, double-jump and aim her weapon in eight directions. There is also a dash feature, although it seems a little pointless. In execution, you would expect the dash move to allow our heroine a moment or two of invulnerability, but alas no such luck.

The game is spread over four levels, with boss fights dispersed irregularly throughout. Accompanying the retro-inspired colourful visuals, a suitably nostalgic soundtrack and punchy sound effects add to the arcade-style ambience (although I defy you to not be irritated by the main character’s scream upon losing a life).

The opening level is a side-scrolling onslaught with occasional boss fights throughout. The subsequent level is heavily influenced by the late 80s arcade game Pang, with large balls bouncing around the screen which, when fired upon, break down into smaller balls. On each level of the game (but in this level in particular), the screen can become quite cluttered with enemies, bullets, and collectable gems. There were also occasional moments of slow-down; the Switch was probably trying to comprehend what was going on just as much as I was.

The next level is an auto-scrolling ride on the roof of your police car, aiming at your opponents as they swarm towards you from both sides of the screen. There is some variety in the dynamics of each level of Gun Crazy, but my main criticism is that there is not much content on offer overall. Once you have learned the enemy’s attack patterns, you can expect to easily complete the game in under half an hour.

The standard weapon at your disposal has unlimited ammo, and there are collectable power-ups for alternative weapons that have a finite number of bullets. Each weapon has its own unique sound effect, but they are quite similar in their effectiveness; the best tactic is to keep your finger on the Fire button and dodge enemy bullets as best you can. In fact, I was able to complete the opening level relatively unscathed by simply running continuously to the right and firing in front of me as I went.

As a homage to the arcade classics of the genre, Gun Crazy provides a suitable distraction for a relatively short period of time. There are a generous amount of lives and continues to keep you in the game, and visually Gun Crazy hits the right spot. A little more content and a more original take on the genre would have elevated the game to more of a recommendation, but as it stands it runs the risk of being drowned out by many other shooters offering just as many guns and far more craziness.

Gun Crazy ticks the correct boxes for a nicely presented retro-inspired 2D run ‘n’ gun arcade game, but there is little originality and the overall package can be completed without breaking into too much of a pixelated sweat.