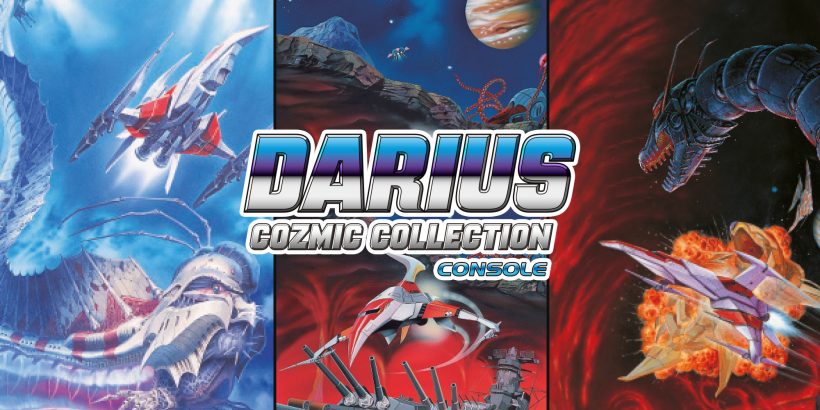 Taito recently unleashed two Darius collections upon the Switch, one for the arcade originals and another for the console ports. In truth, if you love the franchise, your first stop should be Darius Cozmic Collection Arcade. However, if you’ve conquered that realm and want to move on to other Darius-minded pursuits, then dive into Darius Cozmic Collection Console, a package that features – you guessed it – the console versions of this classic shmup series. All in all, it’s a fine release.

While they’re not spot-on recreations of their arcade counterparts, these nifty ports of the Darius saga are likely the only way many gamers experienced these titles back in the day. And as a purely nostalgic adventure, the console editions do a fine job of recreating the thrills and sweat-inducing anxiety of the original releases. Sure, they’re a bit slower, not as graphically polished, and a tad easier, but they’re still a blast to play.

The games featured in Darius Cozmic Collection Console offer the same setup as their arcade-released siblings. In short, you fly a spaceship across side-scrolling alien worlds populated with aliens that look like creepy giant fish. These creatures hate you with an undying passion, and they’ll go out of their way to make your journey miserable. If you hate dying in video games, pack it in now – Darius will chew you up and spit you out, and then gleefully gobble up your gummy remains.

If you’re unfamiliar with shmups, then know this: Darius is hardcore. I hadn’t played the games in years, and my first go-around with both the Arcade and Console collections proved just how rusty my skills have become. Fortunately, the Darius Cozmic Collection Console doesn’t grind your face into the interplanetary gravel in the same manner as its counterpart. It still won’t cut you any slack, but that’s part of the fun.

Although I have mad respect for the arcade originals, this collection features perhaps one of my all-time favourite shmups: Darius Force. Not only does this Super Nintendo release look stunning even by today’s standards, but it also features superb sound design. In my opinion, it’s accessible without compromising the challenge. Did I mention Darius Force gives you different ships to fly? Variety is the spice of life, especially when you’re using them to season fish-aliens.

As much as I love Darius and the Darius Cozmic Collection releases, it raises a few eyebrows that Taito decided to split these into separate packages. Sure, you get Western and Japanese versions, as well as additional content that die-hard fans will appreciate, but it seems a cruel to make cash-strapped shmup fanatics choose between these collections. Each has its own strengths and weaknesses, but together, their respective omissions and shortcomings wouldn’t stand out as much. But Taito wants that money, and Darius fans will definitely pay up.

As stated in my review for Darius Cozmic Collection Arcade, the console edition should be your second choice if you truly want the full-blown Darius experience. While enjoyable in their own right, the console ports don’t fully capture the frenetic energy that comes from trying not to die while blasting away at an enormous alien-fish. However, if you simply want a shot of home-console nostalgia or prefer the ports to the arcade editions, Darius Cozmic Collection Console won’t steer you wrong. I just wish Taito had skipped the greed and released one complete package at an affordable price.

Darius Cozmic Collection Console is a must-have for hardcore Darius fans. However, given its shortcomings and steep retail price, it’s not as essential a purchase as the arcade edition of Taito’s shoot-em-up classics.