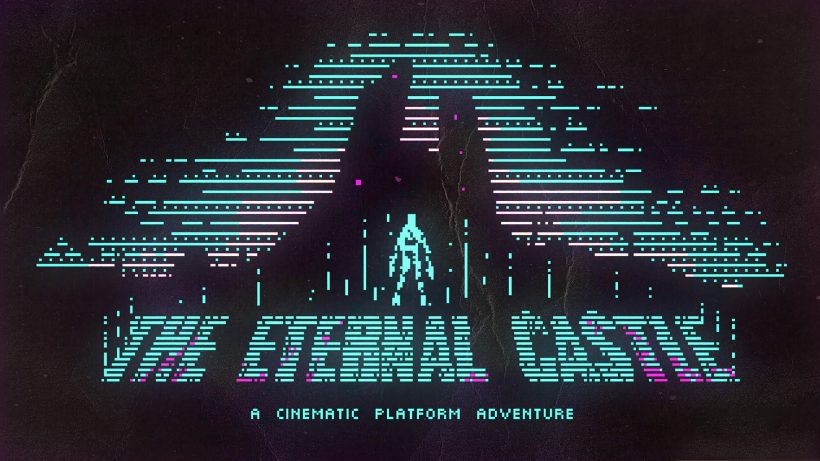 Indie developers are coming up with increasingly bizarre ways to make their platformers stand out in the crowd, but The Eternal Castle [Remastered] achieves this by stripping things down to bare bones – and even going backward a bit. Characters are reduced to silhouettes, the narrative is told in fragments, and controls are laggy. On paper, this sounds like a recipe for disaster; in practice, it’s the palette for an interactive work of art.

The game kicks off with a bizarre wall of text that’s frustratingly difficult (but not impossible) to read: humans have resettled on other planets, but are now sending scavenger units back to Earth for resources. One unit has gone missing – and we’re on a mission to rescue it.

But there’s a problem: We crash-land right at the start, so we’ll also have to collect four missing parts of our ship along the way. Each is guarded by a dangerous boss, and then our ultimate goal is in the Eternal Castle. We play as either Adam or Eve, each of whom has different combat perks (although this isn’t explained in the selection screen.) They can also be played together with two joy-cons in co-op mode.

Moving around in this 2-Bit world is buttery – a bit too much so, with the slight input delay – so it takes time to get used to the movement controls if you don’t want to slip and slide into danger. You get ample opportunity to get accustomed, with plenty of checkpoints and spots where Adam or Eve can meditate and heal. Once you master the irregularities, parkouring around the four main areas will become a breeze. Plot and gameplay aren’t selling points of this game, though: it’s the retro CGA visuals.

This is a surprisingly stunning experience, considering the crunchy style; puzzles and story elements are creatively embedded within detailed environments, where the harsh colour contrast makes for striking scenes of a decimated Earth. From a laboratory to a ruined city, there is a variety of screenshot-worthy vignettes. Powerful synth music caps off the ambience, utilizing perfectly timed shifts in mood to set the ominous tone and build tension.

The eye-catching visual format is a downside when there are lots of moving parts, particularly in rainy scenes. It’s easy for your silhouetted character to get lost in the shuffle. Interrupting the old-school art style are cinematic animations: falling or flying objects move in a lifelike way compared to the pixelated environment, and lighting adds drama to static areas. Objects and characters feel weighty in their movements, too, especially in combat.

Speaking of fighting, one might call the hand-to-hand combat in this game sluggish, but I call it simple – you just punch people. No frills. There are weapons and occasional power-ups you can collect along the way to make things a lot easier, and sometimes it takes a second visit to a branched path to find everything (you might even find a secret collectable, too!) That’s a good thing since, all told, this title only takes a handful of hours to beat.

There’s speculation about whether the 1987 game that The Eternal Castle [Remastered] is based on actually exists, but regardless, it holds true to what makes older titles so engaging: With limited technological resources, developers were forced to get creative to pull the audience into their story. However, it also suffers from some retro shortcomings. Regardless, this is a stunning homage to classic platforming.

The Eternal Castle [Remastered] creates interactive art with this arcade-style platformer, but its old-school nature comes with both charm and flaws. While it is a one-of-a-kind experience with a co-op option, those seeking robust gameplay options should look elsewhere.