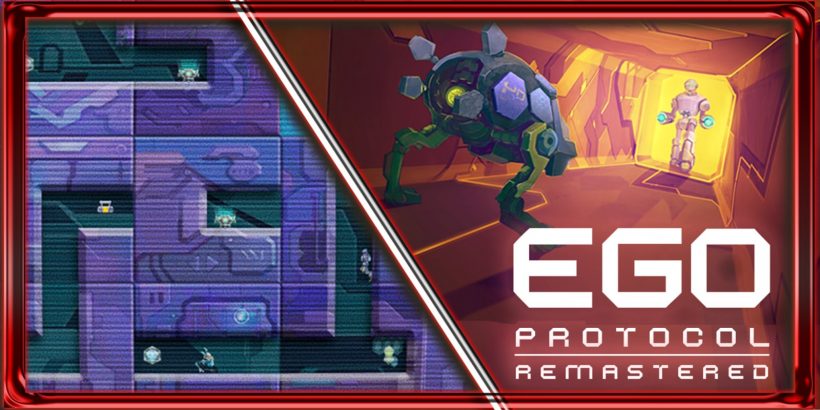 Some puzzles prove to be more annoying than they are fun.

Take the Rubik’s Cube, for example. Yes, it’s deeply impressive watching someone solve them in 10 seconds flat. But playing them yourself, and watching every move you make just simply make things worse, quickly becomes void of any novelty whatsoever. Ego Protocol: Remastered is a new Switch version of a 2016 Steam original, and while the premise is simple, the practice isn’t close to it.

This is, for all intents and purposes, a tile-sliding puzzler, although it is one more complex than most of the others that we’ve seen on the Switch. The tile-sliding, which is often relegated to a mini-game as part of a wider adventure elsewhere, is given an extra layer of depth by the need to frequently change the layout of the tiles throughout the course of the puzzle. The goal remains the same – to guide a robot from the entrance to the exit – but you’ll need to do a number of things along the way to ensure it gets there. The tutorial puzzle is simple, allowing you to create one simple corridor from start to finish. But after that, you need to start truly engaging your brain.

Once you hit the button that starts the robot moving, you’ll have very little control over it. If it hits any walls, it’ll double back the way it came. It can hop up small ledges, but anything taller than its own height represents a dead end. So, some tiles will allow you to pass right through them, others will have only one way in and out, and some might have drops, which in some puzzles are the only way to move down through the rows of squares. The squares aren’t uninhabited though; the most important object you’ll find along the way are the collectables that open the end-of-level gate. However, there are also enemies, bombs, and disappearing flooring, which must be walked over twice to collect any items hidden underneath.

Commands to the robot are all handled with the one action button, but this only becomes illuminated when you’re within range of whatever needs doing. So, you might collect a gun in one square, but you’ll only be able to fire it when you’re within two arms’ length of an enemy. Other inputs include pausing to avoid enemy fire from above and jumping across gaps where there’s space to do so.

The game’s default visual setting makes things look pretty grainy in a bid to give things a retro feel, but while this looks alright in handheld mode, it does irritation to the eyes when played on the TV screen. It makes logical sense that the D-Pad is the preferred control method for picking between rows and columns in the grid, but don’t even try using the control stick for the same purpose, because the weird square highlighting will be quickly disorientating.

Going back to the Rubik’s Cube analogy, though, that’s pretty much the feeling you get when playing Ego Protocol: Remastered. You’ll progress through levels but rarely feel the urge to go back and get the three-star score by beating the time limit and collecting all the necessary items on your journey through the squares. Unfortunately, the addition of new mechanics does very little to liven things up. Ego Protocol: Remastered is really missing that special spark – it feels like a middle-of-the-road mobile title.

Ego Protocol: Remastered is a puzzle title which provides more irritation than it does satisfaction. The fiddly tile-sliding proves so much of a chore that there’s little to no motivation to go on and get three-star scores on each level.