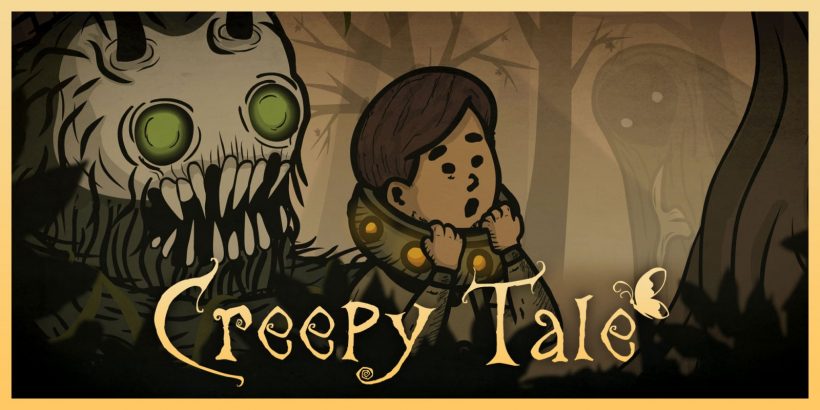 Don’t you just hate it when you are walking in the woods picking mushrooms with your brother, only for a passing luminous butterfly to lure your sibling into a ramshackle hut occupied by hairy monsters?

All you can do is watch helplessly through a window as an unusual neck brace is clasped around his neck and he’s carted away to an unknown fate. It is up to you – as the remaining brother – to explore the woods and rescue the kidnap victim.

The story of Creepy Tale dwells in a forest presented in lush 2D comic-book form, with an art style that hints at Brothers Grimm and a browner Limbo. But where Limbo had genuinely terrifying moments that could induce panic, Creepy Tale offers a gentler take on the horror genre. Ghosts peep out from behind trees, and witches concoct mysterious potions in pots.

Your character has no means to defend himself, and so the only way to avoid defeat when confronted by a dangerous creature is to run, hide, or solve a puzzle that will get you out of the danger zone. Death can come suddenly (and unexpectedly; an element of trial and error will be required) but the game automatically saves your progress regularly.

The DNA of the game is rooted in point-and-click adventuring rather than platform gaming action. The story is divided into episodes, and the logic behind the puzzles within each episode range from the obvious to the odd, and can be the weak link in a potentially promising game. Despite the varying logic, there are some challenges that provide a genuine “a-ha!” moment when the penny drops. In one memorable scene in a witch’s home, visual clues in the background provide hints to the ingredients needed to mix a poisonous potion to put an end to the witch. There is even an opportunity to learn to play the reed pipe as part of your character’s puzzle-solving repertoire.

Creepy Tale has the option of activating hints on-screen, which provide a visual clue of items that can be used. Without it, you may find yourself wandering around far more than you would want to, moving with pixel-perfect precision to align yourself with various objects to see if they can be interacted with. This can be even more frustrating when you need to carry out an action before the arrival of a monster. The game is more enjoyable with hints turned on, but if you have more time to spare and want to elongate your gaming time with Creepy Tale, you may prefer to play without the guidance of visual clues.

The atmospheric art style and eerie spot effects help the game achieve its aim of being – appropriately – a creepy tale. The creatures are suitably disturbing, and the ending alludes to a bigger untold story. That ending may however come sooner than you would expect; a run-through of the game can be completed in less than an hour.

Deqaf Studio have created an enticing story with a distinctive visual appeal that does not quite achieve the lofty heights of the golden age of point-and-click adventuring that it is referencing. The tale has a short lifespan and puzzle logic can be hit and miss. The developers have hinted that a sequel is in the works, and so hopefully the foundations that are in place will help create a more satisfying walk in the woods the next time.

Creepy Tale is an atmospheric excursion that can be completed in under an hour, although it could take longer (but prove more frustrating) without the hints option activated. This is a bite-size adventure garnished with creepy charm.