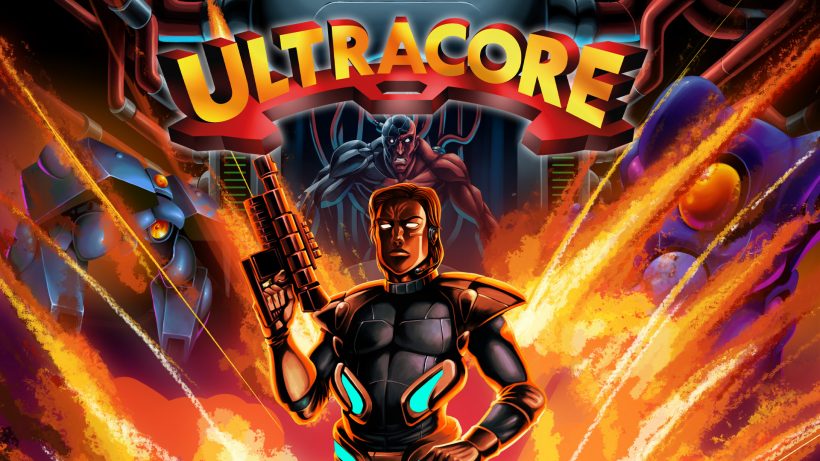 The Switch isn’t left wanting for 2D side-scrollers that harken back to the 16-bit era.

Heck, it feels like you see at least three of them release on the eShop every week. However, sometimes an interesting one pops up that is worthy of your attention. Ultracore is one of those but it’s unfortunately not due to the gameplay or aesthetic and more so because of its storied development history. This is an old-school run-and-gun game that was initially set to release in 1994 before it was oddly cancelled. Was the sixteen-year wait worth it? Not really, but that’s okay.

All this isn’t to say that Ultracore is a particularly bad run-and-gunner, just that most of its cool tricks and concepts have now been improved by contemporary takes on the genre that are  more refined. Modern games like Mercenary Kings and Cuphead all make shooting and dodging on a 2D plane fun while still sprinkling in their own quirks, whereas Ultracore is incredibly straightforward. You enter a stage, shoot everything that stands in your way, and move on. Simple.

Advancing through stages feels fulfilling at first, mainly because you play the role of a one-man army who can upgrade weapons and bomb the whole screen when times get tough. Eventually, though, Ultracore reveals itself as a hallmark of the time it was originally developed in, mostly in how platforming challenges have a nasty habit of unfairly killing you. Don’t get me wrong, Ultracore isn’t as difficult as, say, a Ghosts ‘n Goblins, but there are so many instances where the environment will kill you rather cheaply. How certain landing pads function aren’t well telegraphed to you.

Normally this wouldn’t be an issue, but instead of spawning you back to the last checkpoint without much of a penalty, dying in Ultracore sees you lose a life. You can of course acquire more though by default you begin with five. Lose all of those and you’ll be brought to a continue screen where it’s revealed that you can only lose all your lives a maximum three times. This, combined with the 4:3 aspect ratio and in-game scoreboard, results in an arcade-like presentation that is clearly done to have you be nostalgic for when game cabinets ruled the world, but here it ends up working against you.

On the brighter side of things Ultracore does give you 360° of aiming, which might not sound like much yet it makes all the difference when facing wall-to-wall rooms of enemies. The boss fights that punctuate the end of each stage are also fairly creative. Most simply require you to continually shoot a specific spot or armour piece while dodging countless bullets. Almost all of them, however, offer a decent challenge as you’re having to perform this bullet dance while confined to a single screen.

The long road to Ultracore’s release may have ended up being more interesting than the finished product, but as a historical document this 2D action game serves as a nice reminder of when run-and-gun titles were a lot purer. It’s just extremely unfortunate that too many old-school drawbacks hold Ultracore back from playing like a smooth experience in 2020. There are simply plenty of other games of this ilk available to play on Nintendo Switch – often with a lot more depth, personality and some appreciated new twists. It’s hard to imagine anyone wanting to play through this more than once.

As a historical document, Ultracore is an interesting 2D run-and-gunner on Switch. It’s just a shame that modern takes on the genre have bested it at its own game. Do seek out the Strictly Limited Games CE, though.