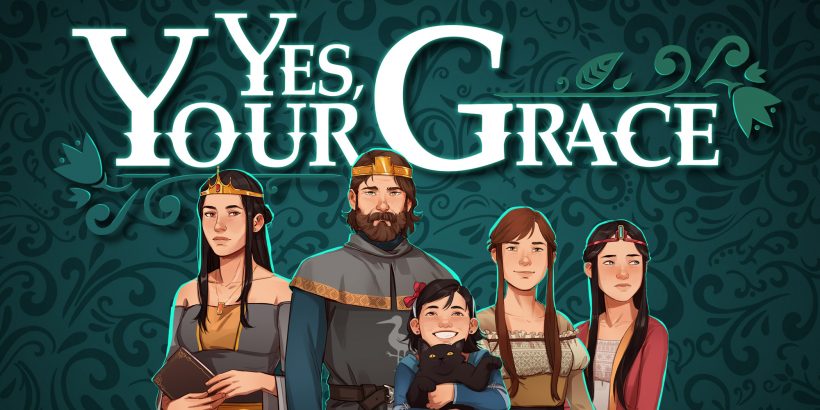 Getting to rule your own kingdom is hard work. Balancing the needs of your people, the obligations of your family and your own ambition all mean difficult decisions need to be made, and eventually your choices will cause upset (or death). Coming from developers Brave At Night, Yes, Your Grace is the new pixel art kingdom simulation RPG on Nintendo Switch that will force you to make these difficult decisions. But is it a royal romp, or like pulling swords from stones?

Ruling as King Eryk, The Kingdom of Davern is in disarray, and it is up to you answer the problems of your people, forge alliances, and balance your relationships with your Queen and daughters. Weekly you’ll listen to petitioners, deciding if and/or how you will help each villager’s plight. Some may want to fix a tavern, some seek medical aid, and many more will describe interesting and maybe unbelievable problems for you to agonise over. These decisions will not only cost gold, supplies and the attention of a general, but in some of the game’s best moments test your relationships with your family as well.

After a few weeks, these consequences become clear and it’s all woven neatly in with the tale of an oncoming invasion from Radovia. The cast of characters you interact with, including your family, nobles and other NPCs are all interesting and well written, given humorous life with appropriately pitched groans reminiscent of a Banjo-Kazooie character. These strange tones, mixed with the great pixel art visuals and magnificent music, strike a good balance between grandiose and humorous that allows the game to make you laugh one minute and punch you in the soul the next.

Calling for nobles can help forge new alliances, though most donations will come with some sort of cost. The slow roll-out of further mechanics works well, and the likeable characters and interesting twists helped to sell this story; your decisions give it a feeling of weight and accountability that kept me invested through much of the narrative. Each passing week reveals another thread to the story, another general to command or game mechanic you can utilise, meanwhile with a deft balance of negotiations and your supplies, your armies will creep up in numbers to meet the climactic battle hanging over your head.

This is a game that depends on the quality of its writing, which is consistently engaging enough to bring this world to life, but if you’re hoping to make the most of this title you’ll have to make sure you’re paying attention, and you’ll be sitting through quite a lot of dialogue to understand everything. Sadly, there were quite a few times when my immersion was ruined by clumsy AI. Simple decisions are often buried under strange button choices or unclear menu navigation, and given the point & click style, it seems especially counter-intuitive that there is no touch screen support in handheld mode.

Ultimately, Yes, Your Grace is a deeply engaging family story, brought to life with rich characters, dialogue and a dark, twisting story. I quickly felt the struggles of my people, but even more so the lives of my daughters, such that each decision needed true consideration as I balanced the needs of my family over the demands of my kingdom.  The power and the work of a king is brought to life beautifully here, but after a few weeks, you may be surprised to find you care more about your family than your army. A few clunky UI elements hold it back, but this is still an interesting and engaging story with meaningful weight to each decision. Heavy is the head that wears the crown…

Yes, Your Grace impresses with a deep narrative exploring the true weight of the crown, colourful characters and satisfying decisions that are all brought to life with fantastic writing and beautiful presentation. It feels better to play on PC, but this is still a confident port for Switch players who want to experience this story on the go.