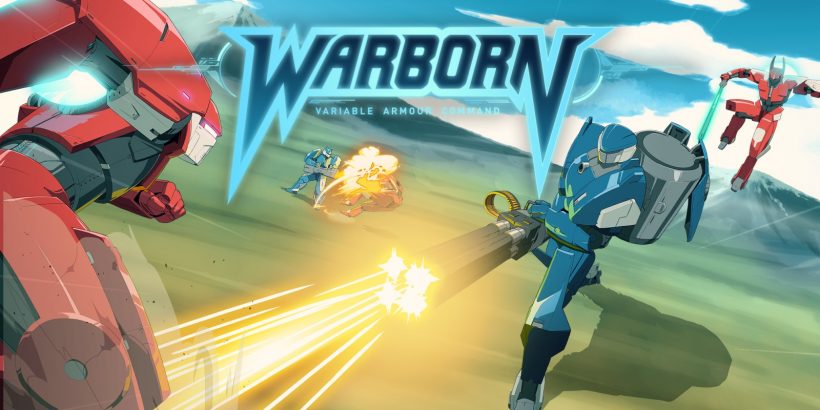 Although I love the genre and have spent hours playing everything from Civilization to Stellaris, I am not very good at them. This fact became all the more soul-shattering when I struggled to complete the Warborn tutorial, which, technically speaking, seems like “baby’s first hex-based strategy game” compared to other like-minded endeavours on the market. Either that or Warborn’s simple design hides a deviously complex strategy game. I’m pretty sure I’m just terrible.

Raredrop Games’ tactical strategy game feels very similar to Wargroove, though Warborn seems more in tune with 90s anime. Since the story becomes a bit complex at times, I’ll sum it up like this: People pilot enormous robots in an attempt to dominate other factions (who also have their own enormous robots) for control in a climate rife with political intrigue. I’m painting this picture with a very broad stroke, but that’s the gist of the narrative. The drama unfolds like a bare-bones visual novel, so if you’re not into reading gobs of text, you’re in serious trouble.

Combat involves navigating your different mechs around a hex-based map, with each type of robot possessing its own strengths and weaknesses. For example, the mechs that can move several spaces often have the weakest weapons, whereas the tank-ish ‘bots move only a few steps and pack the biggest punch. If you’ve played something along the lines of the aforementioned Wargroove or Advance Wars, you’ll know precisely what you’re getting into. For better and for worse, Warborn doesn’t stray too far from that well-worn formula, making it a rather ho-hum experience overall. Still, if you crave this sort of experience, then it will most certainly fill that particular void.

During each of the game’s different campaigns, you’ll have access to a specific commander. Each of these highly trained individuals has his or her own unique mech, one that can wipe out the competition without breaking a sweat. Unless, of course, you’re a clumsy strategy fan who can’t seem to think more than two steps ahead. Watching the first commander bite the dust during the tutorial mission made me feel both frustrated and grossly inadequate, and I questioned whether I even had the chops to make it all the way through the campaign. Full disclosure: I’m almost at the end of Warborn, and I’ve sunk 28 hours into it. If you’re remotely skilled at tactical strategy games, I have a feeling you’ll wrap things up in under twenty hours or so.

Despite its basic mechanics and been-there-done-that combat, Warborn shines in its ability to successfully recapture the magic of 90s Gundam-style anime. The narrative comes complete with silly dialogue and colourful characters who fill the archetypes like a glove. Again, as with everything else in Warborn, you won’t walk away from the story feeling as though you’re entire existence has been dramatically altered, but it should keep you grinning for the duration. Hey, I’m a cheap date.

Will Warborn appeal to veterans of the genre? That’s tough to say. However, if you’ve ever fancied a go at tactical strategy games but often become overwhelmed by all the systems and stats that tend to overwhelm your senses, then Warborn should help ease you into the genre without too much trouble. It’s also appealing for people like me who love strategy games but can’t win a battle without the help of your overpowered commander.

Warborn is a very by-the-numbers tactical strategy game. And while there’s nothing inherently wrong with this fact, the game doesn’t do enough to separate it from the pack or make it appealing to genre veterans.