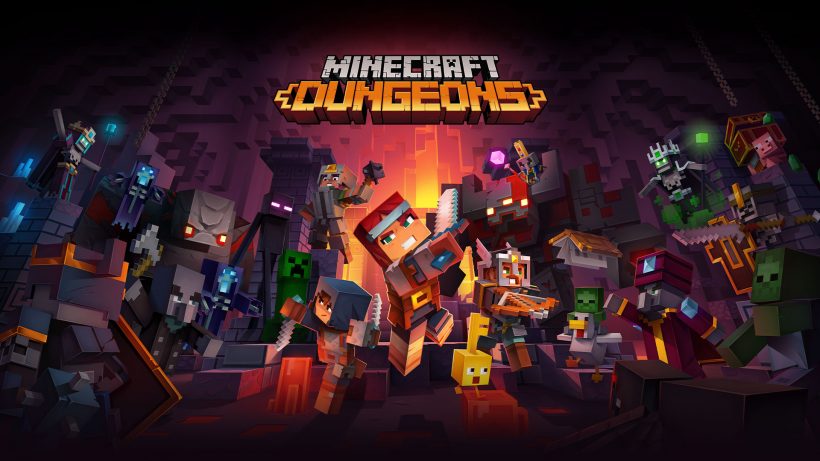 Minecraft was released on the Nintendo Switch back in 2018, making it available on pretty much every platform, and it is a game loved by thousands of players. So, if I had told you a year ago that Mojang was planning to release a dungeon crawler, I don’t think you would believe me. However, let me tell you this: Minecraft Dungeons is the Minecraft game we never knew we needed.

Minecraft Dungeons is Mojang Studios’ latest creation, but it does something a little different: it’s a dungeon crawler set in the Minecraft universe. Explore randomly generated dungeons, collect loot, and defeat enemies from the much-loved franchise such as skeletons, zombies and creepers. But what’s the story? A lonely Illager goes from village to village looking for acceptance, only to be ridiculed and scorned by everyone he encounters. Haunted by revenge, the Illager stumbles across a dungeon containing the Orb of Dominance, corrupting the now Arch-Illiger. Set on a mission to take vengeance on those who didn’t accept him, the Arch-Illiger unleashes enemies across the world. You, the hero, must stop the Arch-Illiger once and for all.

I would describe Minecraft Dungeons as a ‘My First Dungeon Crawler’ experience. It has been simplified quite a lot, with no classes to choose from – only a choice of characters that offer cosmetic differences and no character skill trees whatsoever. Instead, the game focuses on weapons, armour, and artefact pickups to alter your experience. Your character can equip a melee weapon, a ranged weapon, and a set of armour. Additionally, you can gather three artefacts, from which there are many to choose. Simply put, artefacts are items that offer special abilities; there’s a hunk of meat that allows a wolf to be your companion in battle, a firework that allows your next arrow shot to explode, and a totem that heals anyone inside its area, just to name a few.

Each equipable item you pick up in Minecraft Dungeons has a damage value and various perks. Some armour sets you collect may give you extra health, while others may allow you to take less damage per hit. Some may even allow you to have both – and I found that exciting. Not only that, but all weapons and armour have ‘enchantment’ slots that you can upgrade. Each time you level up, you gain an enchantment point, and you can then stack that into a weapon or armour set of your choosing. Each of them provides different perks and bonuses.

Each weapon has between one and three enchantments slots, allowing you to choose to upgrade from a small selection. You can then level up that skill three times before it maxes out. However, chances are, you will have switched out the weapon before that happens because you’re constantly finding new and better loot. But what happens to your enchantment points? Not to worry! You can salvage any items you no longer want nor use, giving you some gems (the currency used in the game). Additionally, if there are any enchantment points on that piece of equipment, you get them back ready to use on your newly equipped item!

The gems you acquire in Minecraft Dungeons pose no other use than to spend in the two stalls that become available in your camp. The camp is your ‘home’ area of the game, although there really isn’t much to it. There is a blacksmith stall where you can purchase weapons and armour and there is also a wandering trader who sells you artefacts – but there’s a catch. You cannot look through a list and purchase what you desire; you’re given a random item of random rarity. Is this a little annoying or an added exciting feature for the game? You decide.

Minecraft Dungeons can be enjoyed solo or with up to three other friends via local or online multiplayer. Having experienced playing in both ways, I can happily say that if you are able, playing with some friends is the way to go. It provided some extra fun and oomph that seemed to be absent when I was playing alone. I found that when I was playing alone, I was rushing through the levels without really caring what was happening.

It’s got to be said, Minecraft Dungeons looks great – when it’s docked. The same cannot be said about the game in handheld mode. In docked mode, there is a ton of detail, not only in the world itself but in the character’s armour and weapons. You can see the difference in each armour variant, and sadly, this doesn’t extend to the game in handheld mode. In handheld, everything seems a lot more condensed, it’s more blocky (I know Minecraft is blocky) and it’s a lot harder to point out those details than you can when it’s docked.

Minecraft Dungeons is a great game for newcomers of the genre, the series, and veteran players alike. Only slightly held back by its lacklustre graphics in handheld mode, this dungeon crawler is definitely worth a go.