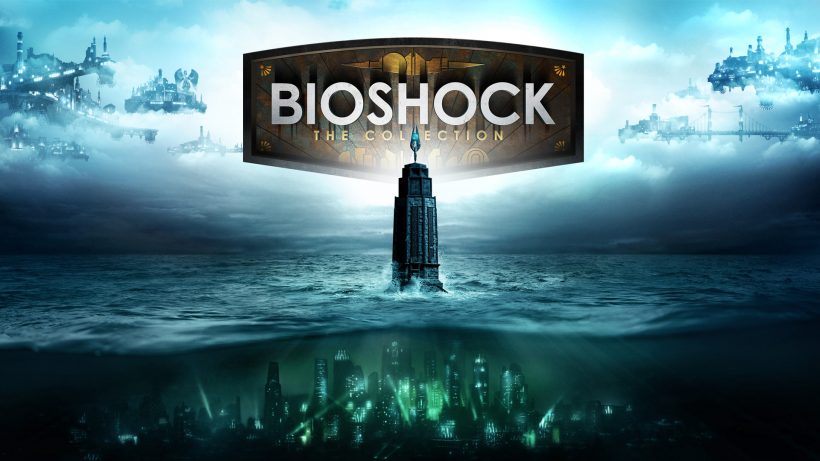 If you’re a BioShock newbie, and are wondering if The Collection is worthy of your time, then prepare yourself for an immersive experience filled with atmospheric environments and an intriguing story.

It’s not random that world, atmosphere and story are the strongest perks of the BioShock franchise. After all, the first game was conceived as a kind of spiritual successor of the cult classic System Shock (its development team even included members of the original studio). Each with its own merits and peculiarities, BioShock, BioShock 2, and BioShock Infinite explore, expand, and play with the expectations, elements and tropes of the immersive sim – which allows the BioShock franchise to excel when compared with other games of the genre such as Prey, Dishonored, and Deus Ex.

The way the first BioShock does this is still unparalleled to this day. After an introduction that is as iconic as the train section from Half-Life, you’ll find yourself on the underwater city of Rapture. As you learn from audio logs and environmental storytelling, this utopic place was built without moral constraints regulating sciences, arts or economy – plus, a powerful substance called Adam that can be used to modify people’s DNA in unique and unusual ways, granting them superpower-like capabilities. However, the same Adam that helped the city to develop also transformed its users into insane ‘Splicers’ – disfigured people that would do anything to get more Adam. Amid all the ruins and chaos of the now-destroyed city, you must do your best to survive as you get involved with a power struggle between Rapture’s political leaders.

Along the 12-hour long campaign of BioShock, you’ll learn more about the intricacies of Rapture – how, for instance, they created the Big Daddies and Little Sisters, two important types of characters that are responsible for gathering Adam from dead Splicers. Exploring the city and learning about Rapture’s lore is definitely the best part of the first game. Not only because the game’s narrative is rich and detailed, but also due to how each location is crafted, creating atmospheric environments that can be scary, awe-inspiring, and utterly incredible. As if that wasn’t enough, BioShock’s narrative also comes with some truly mind-blowing moments, subverting your expectations in a way that could only be achieved in videogames. Experiencing this for the first time is truly spectacular. Yet, a second (or third, or forth…) run also allows the player to find new, unnoticed details.

Unfortunately, BioShock isn’t free of a specific grievance: its controls and mechanics haven’t aged as well as the other games from The Collection. Surely, BioShock 1 is a kind of slower-paced FPS, in which you’re not encouraged to go all-guns-blazing in each encounter, but still, unprecise controls and poor gun-feel can disturb the combat sections at times. Never to the point of ruining your experience, thankfully.

This aspect is exactly where you see the most improvements when it comes to BioShock 2. The second title sees a return to Rapture. Ten years have passed since the events of the first game, and you’re now in control of one of the Big Daddies. Playing Bioshock 1 and 2 in sequence helps to highlight the strong points of both titles. While BioShock 2 has many improvements when it comes to the gameplay department, its narrative is much less effective and interesting.

This happens for two distinct reasons. Firstly, you’re now more familiar with Rapture. Although you’re able to learn more about that fantastic dystrophy, revisiting the city feels a bit less spectacular for the second time. In addition to that, BioShock 2’s main narrative deals with a specific struggle between few new characters – feeling less epic than what you’ve seen before. Still, BioShock 2 has lots of amazing stuff to offer, especially when it comes to the relationship between Little Sisters and Big Daddies.

It’s also worth mentioning that BioShock: The Collection offers the full version of each game, which means you can also play the excellent Minerva’s Den expansion. This 4-hour long extra campaign for BioShock 2 shines a fresh light on an entirely new section of Rapture: its computational mainframe. With a new protagonist, new villains and a self-contained narrative, Minerva’s Den encapsulates some of the best moments of the entire franchise – unexpected twists included.

To close up the package on a very high note, BioShock Infinite shows that the franchise can achieve new highs – literally. This time, instead of the submarine Rapture, you’re visiting Columbia, a new dystopian city that lies on the clouds. At the same time as this third title maintains all the main icons from the BioShock franchise (dystopian city with political struggles, a fantastic superpower at your fingertips, gigantic mechanic enemies), you’ll also find many new improvements in every department.

For instance, BioShock Infinite is the most action-packed game from the trilogy. With slick gun-play and incredibly fun new powers, the game excels in making you feel really powerful at all times. From the simplest grunts to the heavy-hitters, each encounter is much more challenging, as they’re designed to feel epic, cinematic and explosive.

This refined gameplay comes with another great narrative. Behind Columbia’s astonishing wonder lies an intriguing power struggle associated with blind faith, prejudice, and otherworldly sci-fi phenomena. Similar to the first BioShock, Infinite also comes with a mind-blowing twist that will stick hard with you, making you think about its many repercussions for a long time after putting down the Switch. If you want for more of that, it also comes with the two chapters of the narrative DLC Burial at Sea, which expands the whole BioShock narrative in entirely new ways.

When 2K first announced this port of BioShock: The Collection for the Nintendo Switch, there was fear about how it would run. After all, when that same package was released on other platforms, it suffered from some weird performance issues. Thankfully, Virtuous studio did an excellent job with this port, as the three games run smoothly and look beautiful in both handheld and console modes.

If you have never played BioShock before, The Collection is an unmissable package, as it presents the entirety of this wonderful franchise. Yet, even if you have already experienced the mind-blowing twists of BioShock, there’s hardly a better way to revisit Rapture and Columbia than with The Collection.

BioShock: The Collection can be seen as the definitive package of one of the most unique, fantastic, and awe-inspiring franchises ever made. From the classic first BioShock to the action-driven BioShock Infinite, there’s a lot to enjoy within this superb port.