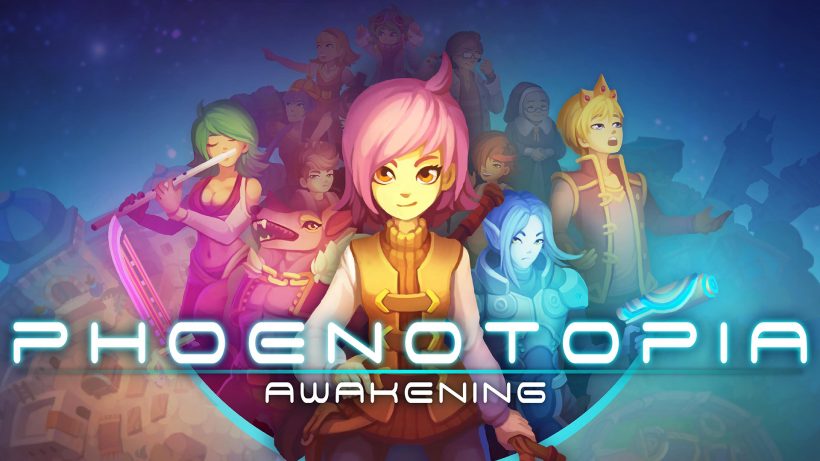 There’s a lot to be said for how a game feels to play. You know you’re onto something when you can sink endless hours into a game, when death doesn’t make you want to put the console down but instead invites you for just one more run. The games like Dead Cells and Sayonara Wild Hearts where you learn something from every mistake, where the missteps are your own, where you can see victory waiting just on the other side of your errors.

Awakening has a lot going for it. Evocative pixel art, nostalgic-but-fresh gameplay, a grand adventure, incredible music, witty dialogue, huggable cats – all of these elements are present, helping to create a welcoming, intriguing experience. The story follows Gail, a fearless, bat-swinging, pink-haired adventurer; a UFO has abducted most of her hometown’s residents, and, naturally, it’s Gail who sets out to save the day.

What follows is Gail’s grand adventure across a vibrant, colourful world, visiting populous towns, curious research labs, and desert hideouts filled with all manner of different people. I can’t stress the worldbuilding enough; Awakening has some of the most spirited, lively environments I’ve come across in recent times, and developer Cape Cosmic ought to be commended for it.

Unfortunately, however, a wonderful world is sometimes not enough to sustain a game, even in the presence of great writing and a fun adventure. Combat is also central to the experience here, but thanks to a complete lack of balance, the odds are stacked against your enjoyment and success from the start. A combination of weak weapons, poor defence, low stamina, and painfully low health makes for a tough experience off the bat; it takes an extraordinarily long time to upgrade your gear, too, thanks to extortionate prices in the shops, and unresponsive controls make it difficult to get into a state of flow when facing off against enemies.

Nevertheless, regular combat does become more bearable once you’ve finally managed to upgrade your gear somewhat; the real problem in Phoenotopia: Awakening is the fights against the many overpowered bosses which gate your progress. If you’re unlucky, a single wrong move against a boss can take you from full health to death almost instantly, as boss attacks will frequently stun you for just long enough to allow the boss to give you another good old whack – rinse and repeat until it’s game over for Gail.

The frustration here cannot be understated. Unlike something such as Dead Cells where, despite the challenges, you’re invited to learn from every misstep, Awakening feels like it just doesn’t want you to succeed. I’m certainly not one to shy away from a challenge, but Awakening gives you so little in exchange for your persistence that after a while you start to wonder why you’re still playing. Successfully beating a boss rarely brings satisfaction, but rather relief that it’s over, and a desperate hope that respite awaits in the form of a new adventuring segment.

The misbalanced combat in Awakening feels like an extraordinary oversight. Between the boss fights, the game comes alive as you explore the beautiful environments, talk to the delightful NPCs, and make mental notes of the places you’ll need to return to later to collect unreachable items. It’s nostalgic, inviting, and interesting, but the combat lowers what might have been a formidable adventure-platformer to a game to approach with caution.

Editor’s note 27/08/2020: A patch addressing a number of the concerns raised in this review is on the way. You can read the patch notes here.

Phoenotopia: Awakening has the ingredients for an excellent experience, but poorly balanced combat mechanics and incredibly steep difficulty get in the way of a good time. With no adjustable difficulty settings in the game, be prepared for a slog.